A marathon Chaffee Board of County Commissioners (BoCC) session on Tuesday taxed the human reserves of the commissioners, county staff and public alike, as several controversial applications were advanced, and a few were continued in a session that stretched from 9:00 a.m. to past 6:00 p.m.

The day included two controversial public hearings; an 11:00 a.m. hearing on an amended Bonfire Entertainment event already approved for The Meadows outside Buena Vista, and a 1:00 p.m. continued hearing on the BlueTriton Brands 1041 Permit. Neither happened on schedule.

Meet Me at the Creek

The BoCC unanimously approved the amended application from Bonfire Entertainment, specifying that the South Main Arts and Parks Trust was the nonprofit of record and accepting a recommended 105 dB (decibel) level at “the front of the house”. This is defined as the sound level at the soundboard, which is 60 to 90 ft. in front of the main stage.

The hearing started late due to the packed BoCC agenda. Nearly 80 attendees came and went on the Zoom connection to the meeting, and a few dozen people filled the seats in the Commissioner’s Meeting Room; its first in-person session since March 2020 due to COVID-19 restrictions.

The in-person audience included families with children, musicians, sound stage producers, and business owners. The crowd’s passion was evident, with most of those there in person to participate in public comment speaking in support of the Meet Me at the Creek music festival, and of Bonfire Entertainment.

“These are special events for my family,” said Buena Vista resident Kevin Meadows, who said he has three kids under the age of 8 who attend the event. “It’s always run safely and professionally. We’ve experienced every one of them. The county needs to work with these applicants to support the events.”

The Bonfire Entertainment application for Meet Me at the Creek was originally approved for Sept. 24 to Sept. 25, 2021 during the June 15 BoCC meeting, after the Board of Health approved an event cap of 5,000 attendees. Left unanswered in that session, was what decibel levels would be allowed. The BoCC asked Bonfire Entertainment to clarify their non-profit affiliation for the event, which, per state statute would allow more leeway for sound levels.

The amended application set forward on July 20, named the South Main Arts and Parks Trust as the nonprofit partner. While a few who commented during the public hearing expressed suspicion that it was indeed a nonprofit (confusing it with the South Main development group), the Chaffee County attorney’s office confirmed they considered it a bona fide nonprofit and so did the state of Colorado.

“So if we did agree that the South Main Arts and Parks Trust is a qualifying nonprofit, do they qualify for a sound level exemption/relief, or is this not automatic?” asked Commissioner Keith Baker.

Asst. County Attorney Daniel Tom clarified that “Nothing in the statutes prevents local authorities from regulating noise.” A discussion ensued about acceptable sound levels and where they would be measured.

Bonfire Entertainment CEO Scotty Stoughton explained that the bluegrass event had already been reduced from three days to two days, the hours for the main headliner have been changed from 12:00 midnight to 10:30 p.m. and the event features only a headliner band and one opener.

“We’ve done three years of Campout for the Cause, with no issues. We’ve had all good reviews of our events. Our headliners do not have drums. We’ve worked for more than a year to deliver something that fits this county,” said Stoughton. “An average dB (decibel level) is 105 at the front of the house…we spotlight it, we measure there at the soundboard. It’s the standard for the state.”

Stoughton explained that the soundboard is 60 to 90 ft. in front of the stage, and that the speakers only face the crowd. He reiterated that not cooperating with the county would mean not being invited back and that they want to cooperate on sound measurements, which they take at 30-minute increments. “Our intention is to do something so possible that we’re invited back year after year…we do this here, in California and Vermont…. this is an enormous risk at this point for us. We want to know where we sit with the county on this. We’re happy to be the guinea pigs – to measure sound, look at the sound limits around the property.”

Avon resident Nicole Timmerman delivered a cautionary tale, saying she’s been coming to this valley for 15 years and now is here more because of the arts and music entertainment. “Coming from another resort town in Avon, we have a theater too, but they got rid of the music and the town has been struggling to get music back – it’s a blessing to have it.”

“Music is not noise, it is art and I’m guessing a lot of you here have been to those free concerts at South Main – you’ve already benefited from it,” said Buena Vista resident Robin Vega.

A few in the crowd questioned why the questions the BoCC were raising questions in front of those assembled, instead of establishing the answers ahead of time. The comments demonstrated a lack of understanding of the transparent expectations of government.

“We cannot make decisions in the back room – we have to make them out here,” explained Granzella, explaining that their deliberations are made in front of the public.

“I’m a BV business owner since 2008, and music and cultural events have been beneficial for my business,” said Eddie Sandoval. “I strongly encourage you to find a way to work with Bonfire….there is economic benefit. In addition, music brings joy and culture, and diversity; it grows community.”

“The scope of why I have this property is entirely based on what it does for the community,” said Robert Selby, who with his wife is the majority property owner of The Meadows, which they bought in 2008. “I said this is amazing, how do I make it the best it can be? I can see the change since I came here 16 years ago. And South Main has no interest in this property. It’s is owned separately.”

With several in the crowd mistaking the purpose of the hearing as an initial approval, Chair Greg Felt reminded the audience that “Our intent of this hearing is the sound issue – the event has been approved. The event organizer asked us to pause and clarify this.”

After more than two hours of discussion, the commissioners wrapped the public hearing.

“Based on the applicant, and principals have stated their nonprofit does qualify and represent the intent, making them eligible for special consideration for the sound levels… to my standard is to allow them up to 105 dB at the mixing board,” said Baker, who made the motion to approve the amended application. “In the resolution, we should include a sound monitoring firm checking the perimeter…. no amplified drums, or electric basses.”

“I’m very pleased with the applicant and their choice of the nonprofit,” said Granzella who seconded the motion. “They have already put money into this county. I”m good with the 105 dBs at the front of house (soundboard). We need to look to the future and they say they want to come back.”

“I agree, the other finding [for the resolution] should be that this is a cultural event – making it more directly tied to the statute and the intent of it,” said Felt. 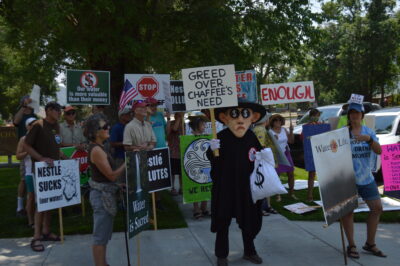 A group of protestors gather outside the Chaffee County Courthouse. Photo by Brooke Gilmore.

The next round of the BlueTriton brands 1041 permit application proceeded more than two hours late on Tuesday, with public review of the first draft of a 1041 permit renewal document beginning at 3:20 p.m.

By that time, the opposition  group of around 20 or so protestors that had staged an event outside the county administration building for the media, appeared to have dwindled. A group of half a dozen protestors attended the permit reviewing in person.

“This is not a license, this is a permit, we handle it like we normally do. We prepare a draft, the commissioners review, the pubic comments, there is deliberation, the staff takes notes, we revise it for you,” said County Attorney Jennie Davis, who referenced an iterative process. “This is not a group drafting process, this is a legal process and people have until July 27 to comment. 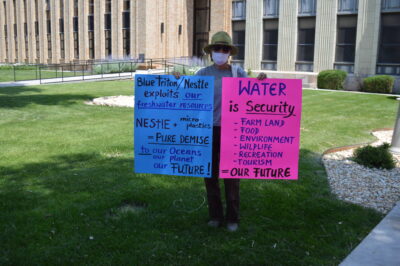 Monika Courtney, owner of Thunderbird Spirit Ranch shows off her signs in protest of the renewal of the Nestle lease. Image by Brooke Gilmore

She pointed out that one of the important new sections of this permit may well be to define the word “transfer.” since the transfer of Nestlé  Waters North America to BlueTriton Brands had become such a major issue of this current 1041 permitting process.

“A corporate lawyer has a defined description of ‘transfer’. Without defining it, it leaves this open … if you want to make sure that any type of transfer is considered as a transfer, keep the more extensive language, so it’s clear to a lawyer and a judge that that would trigger the transfer provision – and require that they come to us to get approval. This wasn’t there in the old permit.”

Felt noted that the intent of this initial review, which may have been tediously technical for most of the audience, was to provide input now, collect more public comment, then prepare a revised document for review on Aug. 3.

The three commissioners appeared to agree that the section representing the most difficulty regarding permit requirements and language was going to be the section 4.15, which lays out endowments and annual programmatic contributions to be made by BlueTriton Brands. At the moment this section suggests that contributions would be made to the National Forest Foundation, a new water sustainability effort, and an integrated waste management system.

Felt indicated that he may lean toward efforts that have real, identifiable programs and could have tangible results.

The BoCC will review the next draft of the 1041 permit language during their Aug. 3 commissioners session.

Featured image: The main stage at The Meadows is not a permanent structure – it is set up and taken down with each event. The Meet Me at the Creek music festival going up Sept. 24-25 will have a main stage and two smaller side stages. (This photo of the Seven Peaks Main stage being constructed in 2018 was taken by Joe Stone).