As Colorado lawmakers consider state laws to encourage more people to get their children vaccinated, the public debate is ramping up. Earlier this week, at least one hundred parents and their children, representing what has come to be known as the ‘anti-vax contingency’, crowded the floors of the Colorado Capital rotunda, announcing that they are there to object to any attempts to make them vaccinate their children. 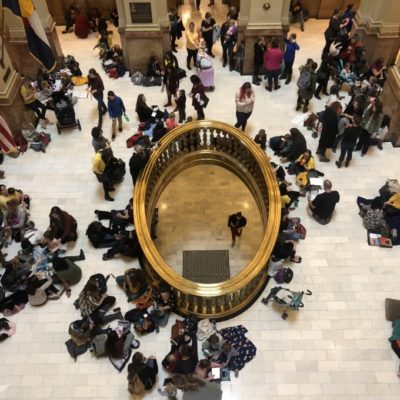 The sit-in, taking place in the midst of global concerns over the coronavirus known as COVID-19, calls into question the individual’s responsibility related to public safety. In question; whether it is wise to congregate in such large groups at a time a global health crisis is in process.

The vaccination debate began again with the introduction in of Senate Bill 20-163. Known as the School Entry Immunization bill, it focuses on what it refers to as “the modernization of the school entry immunization process.”

It would require parents who want to opt a child out of vaccines to either get a signature from an immunization provider or watch an online informational video produced by the Colorado Department of Public Health and Environment.

The proposed Senate bill doesn’t change which exemptions are allowed. In Colorado, people can opt-out for medical or non-medical reasons, such as a personal or religious belief. Right now the process is loose, allowing parents to turn in a form from non-health-related sources such as a child’s school or daycare provider.

There in lies the problem. Colorado has one of the lowest vaccination rates in the nation for children. Public health experts say this is a serious public health concern. According to the Centers for Disease Control and Prevention, the percentage of Colorado kindergarteners vaccinated for measles, mumps and rubella has dropped to 87 percent — the lowest rate in the country.

The bill’s Democratic sponsor, state Sen. Julie Gonzales said some schools are especially vulnerable to potential measles outbreaks. The state’s vaccination rates have fallen well below the 95 percent threshold needed for what is known as “herd immunity.” This means that Coloradans with compromised immune systems, premature babies and pregnant women, people battling cancer and other serious conditions – all are more at risk from the state’s low vaccination rate.

In the last legislative session, public health groups unsuccessfully tried to pass a bill to bolster vaccination rates, but the measure died. Gonzales says she is worried for those who can’t get vaccinated.

The new bill is backed by Democratic Governor Jared Polis. He told CPR that “it strikes the right balance” between protecting parental rights and public health.

This is not the only bill wending through the Colorado legislature. House Bill 20-1239, known as the “Vaccine Consumer Protection Act,” was introduced by Colorado Springs Republican State Rep. Dave Williams. He refers to it as “a free-market approach.”

That proposal reflects the fears expressed by the anti-vaccine contingency over the safety of vaccines. It would require healthcare providers to disclose the ingredients in vaccines, the manufacturer’s website, a list of harmful or adverse impacts and the exemption rules. It also would prevents healthcare workers from recommending or providing a vaccine to someone under the age of 18 without the parent’s consent.

A Republican bill that would have prevented businesses from requiring workers to be vaccinated failed in a Senate committee on Monday.

While the governor’s support may help, the bill focused on vaccination of children is expected to be one of the more contentious issues of this legislative session. Opponents say they’re concerned about what information would be included in a state-sponsored informational video and what doctors would tell patients about vaccines.

Phil Silberman, one of the founding members of the group known as the Colorado Health Choice Alliance, is leading the opposition to mandated vaccination. He points out that while last year their group had 1,000 people at the capital opposing the earlier bill, “This year there will be more.”

Image: by The Denver Post reporter Alex Burness, who covers legislative affairs at the Capital.