In a story by Associated Press reporter Raphael Satter about the Russian overtures to influence and overturn the U.S. sanctions resulting from the Magnitsky Act, Ark Valley Voice Managing Editor Jan Wondra was quoted regarding her leadership of the national nonprofit Families for Russian and Ukrainian Adoption Including Neighboring Countries, an adoptive family support group for families who have adopted in former Soviet bloc countries. 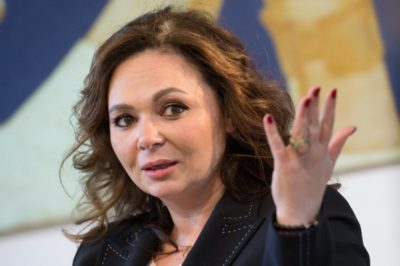 Natalia Veselnitskaya, a Russian lawyer with close ties to the Russian government.

The AP story was picked up overnight Thursday by the Washington Post, TIME, Fox News, Huffington Post, CBS, ABC, The Week and Daily Beast, as well as many other news media, all quoting Wondra as saying “my antennae were out” related to the overtures from Rinat Akhmetshin, a Russian-American lobbyist who was working with lawyer Natalia Veselnitskaya to overturn the sanctions. In a June 8, 2016, meeting, Wondra and the organization she chairs rejected the Russian efforts to involve the nonprofit, citing its policies of neither endorsing or taking political positions, refraining from lobbying, never sharing its database, and carefully following U.S. rules for sending or receiving funds from foreign countries.

The next day Akhmetshin attended a meeting at Trump Tower with Donald Trump Jr. where a thin veneer called “Russian Adoption” was introduced to the meeting.

The AP assembled information showing how Veselnitskaya tried to extend her influence to the United States, where she was working to overturn the Magnitsky Act, a sanctions law that was championed by Bill Browder after his lawyer, Sergei Magnitsky, died under suspicious circumstances in a Russian prison. Veselnitskaya and Akhmetshin’s efforts included attempting to lobby special interest groups such as FRUA to create public pressure, as well as a lobbying effort focused on sanction reduction. The reality is that the Magnitsky Act has everything to do with the money of wealthy Russians, and nothing to do with inter-country adoptions.