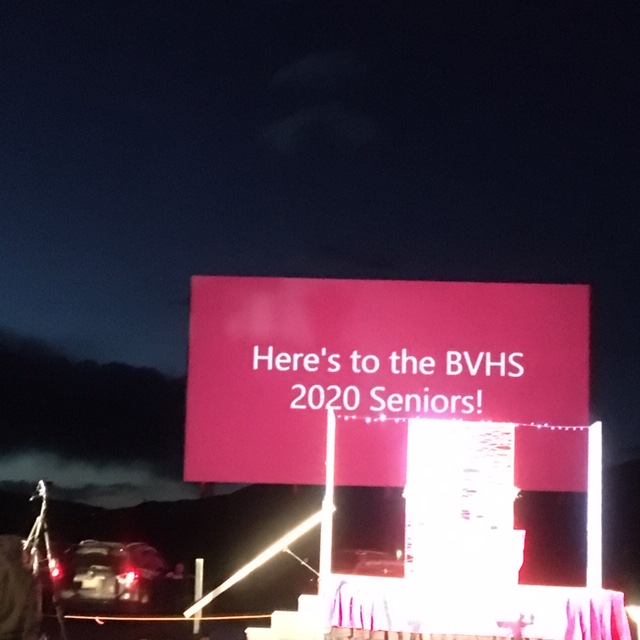 Pomp and Circumstance played by a high school band; each playing their parts alone and represented by cardboard cutouts. Clapping replaced by honking car horns. A delay between the stage remarks and the drive-in movie screen towering behind them, broadcasting on YouTube. It all happened. But the 54 graduates of Buena Vista High School (BVHS) were able to do something that few other high school seniors have yet to do this year. They graduated. 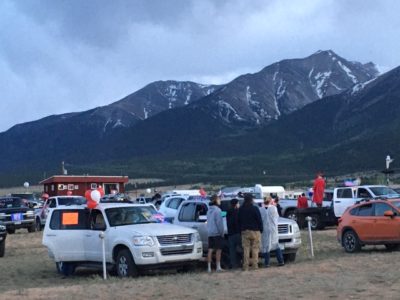 The improbably setting: the Comanche Drive-in Movie Theater at the edge of town; one of only eight drive-ins left in the state of Colorado, and one of only 330 known drive-ins still operating in the United States.

The situation: graduation in the midst of a global pandemic – the coronavirus known as COVID-19.

It brought economic activity to a halt; shutting down schools, businesses, legislative sessions, and the dreams of hundreds of thousands of graduating seniors. 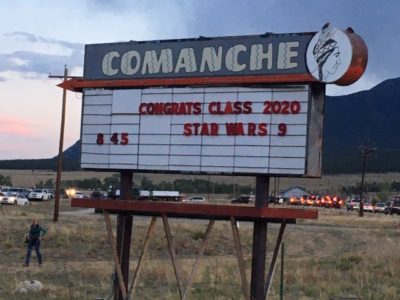 The Saturday evening May 23 event began as the sun was setting over the Collegiate Peaks Range: the result of a driving commitment by BVHS Principal Kevin Denton and the unrelenting efforts of community supporters determined that their graduates would have a real graduation.

“I think overall it was a just an amazing evening once it got rolling,” said Denton. “It felt so right to do – I had the best seat in the house as the kids rolled up in the trucks.”

“I got to see all their smiles, the laughter, the big bright, wide eyes, and the beautiful stage and them in their caps and gowns. That was the best moment,” said Denton. 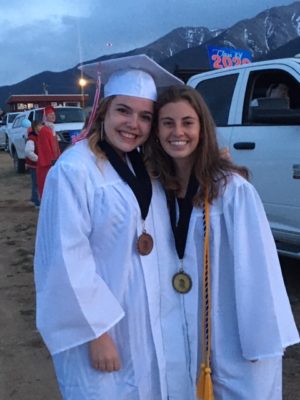 The sudden shut down of schools nationwide was a particular shock in Buena Vista. For this was a year in which the 2020 graduating class of Buena Vista High School had already experienced displacement due to the ongoing construction of the new high school and middle school.

Add to that the disappearance of all the rights of passage – spring sports competitions, prom, senior honor day, and then their graduation – and it was a lot to handle.

That’s when Denton, Superintendent Lisa Yates, and a team of community volunteers began to brainstorm. While other schools in the state canceled ceremonies altogether, and neighboring Salida High school moved graduation to July in hopes of the pandemic public health orders being eased by then, Buena Vista took a different approach. 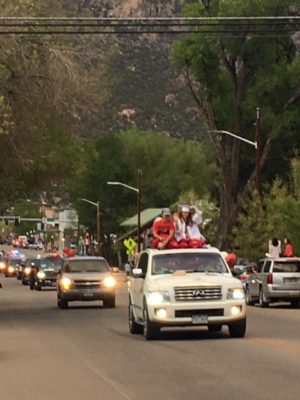 The 2020 Buena Vista graduation began with a parade down Main St. Photo by Jan Wondra.

“No one knows what could happen next, and since this was already going to be a different year [due to the school construction underway] we looked at how to make sure our graduates got at least something to honor them,” said Yates.

Graduation night came with a parade to the drive-in. It was a home-town affair, led by the Buena Vista Police and Fire Departments with balloons and signs and seniors poking through car windows and roof vents, and piled onto truck beds.

The community spread out along Main Street and CR 306 most of the way to the drive-in. The line of nearly 150 cars, lights on as dusk approached, all passed under a giant American flag in a salute to the graduates, hoisted above the road by the Chaffee County Fire Department near the drive-in entry.

“This is so exciting,” said senior Scout McMurry, gazing around at the hubbub. The line of cars containing graduates and their families pulled into drive-in parking spots, and sound crews tested the sound system. “After everything that’s happened. I never thought we’d have the chance to have an actual graduation.” 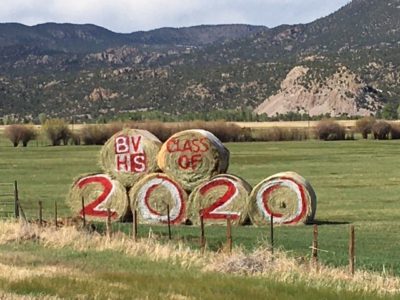 “Tilley Dawson, standing next to McMurry agreed, saying, “The parade, this ceremony, it’s so great! You wonder if maybe people will want to do graduation like this again. I know I’ll never forget it.”

The excited crowd was patient as the sun began setting and problems syncing the sound and video were resolved. But the hour-long delay proved worth it. Finally, after speeches and songs, a bit after 10:30 p.m. the trucks provided by Alpine Lumber delivered graduates, three at a time for social distancing, to the stage to pick up their diplomas.

“We had helped them end their crazy high school experience in a way that had not been what they expected…it’s always fun to exceed expectations and see the surprise on their faces,” said Denton. He added that the giant flag honoring graduates came as a complete surprise to everyone. “The kids and the parents came up and we got to say goodbye. It was good to see them so thrilled.”

To view the graduation, which the school, with the help of the production crew at Clear View Church was able to stream live on youTube, follow this link: BVHS Graduation 2020 5.23.20 (youtu.be)