The Buena Vista Board of Education met for their regular meeting at 6:01 p.m., Monday, January 24, hearing about  Science, Technology, Engineering, the Arts and Mathematics (STEAM) learning in Avery Parsons Elementary, discussing the second quarter report of amended budget, and discussing and approving a purchase agreement for the District Administration Building and the Old McGinnis Gym.

Board Member Brett Mitchell moved to remove items 8.8 and 8.9, agreements with Hachmann Design and Engineering, from the consent agenda before moving to approve the agenda as a whole. The motion carried six-zero, and the agenda was approved as amended.

Finance Director Janice Martin provided the board with an update on the district’s fund balances, the amended revenue and expense budgets, and a summary of the budget’s ongoing, versus one-time dollars.

John O’Brien of John Cutler & Associates joined the meeting virtually to share that there were no issues or difficulties in performing the district’s audit, though there were some corrections that had to be made relating to the capital projects fund. The board had no questions for O’Brien, and Martin moved along to her report.

In the amended quarterly budget, the property tax revenue is currently lower than last year, but Martin expects it will level out for the third quarter as that is usually collected in the spring. She also reported that preschool tuition revenues are back to pre-pandemic levels. State equalization revenues are down about $100,000, but federal revenues are on track. Money from Elementary and Secondary School Emergency Relief (ESSER) 3 has not yet been collected as it is a multi-year fund, while the district has collected 37 percent of ESSER 2 and will be requesting more. For expenditures, the Insurance Fund is at 17 percent of budget, and the Foodservice Fund is doing well, with a cash balance of $104,514. The building fund is also winding down with the completion of the middle and high school projects.

Administration and Board Reports

In her report, Superintendent Lisa Yates shared the recent proclamation from Governor Jared Polis on School Board Recognition Month and thanked the board for their work.

Her Learning in Recovery update was brief, but she shared that the elementary school is currently feeling the biggest impact with staff.  “Numbers are definitely stabilizing in the county, so I’m expecting we’ll see that as well,” she said.

Payroll and Benefits Manager Jenny Swango joined the meeting to share a report from Human Resources. The district currently has nearly 180 staff with an employment agreement, though Swango said the numbers might not include long-term substitutes at some of the schools. 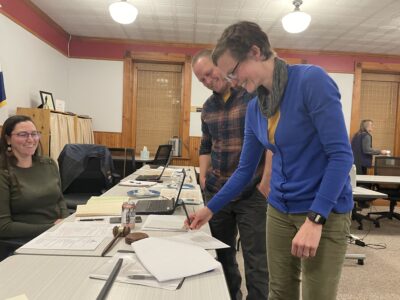 Katy Welter and Rick Bieterman sign a purchase agreement with the district for the District Administration Building and the Old McGinnis Gym. The board hopes to close on the properties by September. Photo by Hannah Harn.

Swango also reported that they will be implementing a digital onboarding process and digital employee personnel and payroll files through Frontline Central, which she is expecting to be “live” in the next two weeks.

“This will hopefully eliminate the personnel files here,” Swango explained. “It will also allow me to do all the onboarding and paperwork for new hires electronically, which will hopefully be a huge time saver.”

Hiring and recruiting will be a priority focus area in the upcoming hiring season, Swango said, and hourly rates for support staff will be addressed to keep ahead of minimum wage increases, account for the cost of living in the area, and be competitive with surrounding areas.

Board President Suzette Hachmann asked how many staff were on the district’s insurance plan, and Swango replied that it was about 60-65  percent of the staff. Board member Jessica Crites asked about numbers and how “down” the district was in terms of staff, and Swango explained that some positions are being filled with long-term substitutes, so they aren’t considered “open” positions.

Crites also asked about the exit interview summary, which prompted discussion around whether it had been included as a report from Yates on Executive Limitations (EL) or if it had been done as a summary report. The board concluded that the Exit Interview Committee needed to provide an annual summary and that it was already reviewed as part of the board’s Governance Process (GP) Policy evaluation for GP-7.

In the Board Reports, Crites reported that she attended the District Accountability Committee (DAC) meeting last Monday, seeing more senior portfolio presentations. Mitchell detailed a few changes within the Boards of Cooperative Educational Services (BOCES), and that BOCES is looking at where it wants to go next year, including professional learning and putting more staff back in schools.

Director Lynn Montoya reported that the Wellness Committee did not meet, and Director Nancy Best said that she joined the recent Zoom call for BV PEAKS (People Engaged Around Kids’ Success). Yates is changing up the calls to have more discussion from members, and Best said it went well. Hachmann took a moment to express her gratitude for how many community members came to the last meeting’s community input session regarding Chaffee County High School.

“We’ve taken it all in,” she said of the feedback, “and our admin team, as well as our Facilities Team, are going to be using that…as they finalize plans.”

Yates added that they’ll be hosting two conversations with CCHS staff and students to talk about and hear what feedback they have regarding designing a new space.

Chandler Vandaveer, a former CCHS student, shared his gratitude for the board’s Jan. 10 community input session and for the space for people to be heard.

“I wanted to commend you guys for just doing that and actually making a space for people to be heard,” he said. “I want to figure out a way to transfer the headlines being you guys receiving an earful to you guys working with the community and the people who care about this school in a collaborative effort, not a confrontational one.”

The board also discussed the town’s Land and Water Conservation Fund grant application. Because the board owns a portion of the property included in the grant (the baseball field) they must be co-applicants. Mitchell moved to approve, and Montoya seconded. The motion carried 6-0.

Yates then moved on to explain the proposed purchase contract with Katy Welter and Rick Bieterman for the District Administration Building and the Old McGinnis Gym.

The board would work on a development agreement from January through March, which would include the lease-to-purchase agreement. Due diligence would run through May, with the property closure in September. Construction would run from 2022 to 2024. Yates also explained that the lease-to-purchase would be dependent on the acquisition of tax credits, and the final cost of the building. The district’s first opportunity to own would be about 10 years from now, with that being their goal.

“We’ve got little ones growing up here,” said Bieterman, a teacher himself. “… We are not developers, we are preservationists…I think one of the things that we feel in this community is this sense of quick change. We’re losing buildings, we’re losing farms, and that’s something that we really cherish and want to figure out how to preserve.”

Welter said that Colorado is a great state for preservation efforts and that they have enjoyed working with the district so far.

“The other team members are architects, engineers…who want to come out next week,” Welter said. The engineers in question are currently working on a hotel in Glacier National Park. “We’re able to attract some of the best people in the state and in the West, really, to take a look at these buildings.

“Our goal is to bring the best people who can deliver the highest quality and value to the district for these buildings,” she said. “It starts with the people.”

Welter noted tax credits available at the state and federal levels to help offset the costs of these projects.  The incentives are intended to make the process affordable but do not handcuff plans. She confirmed Yates’ timeline, adding that they have engineers coming out next week to do structural tests of the buildings.

“What the architects think is feasible is to complete the construction documents on both buildings this year and potentially start construction a year from now,” said Welter. “We’re trying to work within the State Historical Fund’s grant timelines.”

The board had a visit from Technology and Enrichment Teacher Heidi Atha and  Elementary Enrichment Teacher Carol Kelly, who presented on their Professional Growth Plans (PGPs) and the projects students have done in their new STEAM room (Science, Technology, Engineering, Arts, and Math).

Atha and Kelly have developed the STEAM lab and Maker Space to replace the computer lab and to encourage critical thought and resilience by giving students experience with the design process. Atha emphasized the importance of “failing forward” in their process, which was the focus of their PGP.

“We looked at Priority 2 for the district, to instruct with a focus on critical thinking and feedback, and Ends 3, where students demonstrate resiliency and characteristics they need for future life,” she explained. “That’s our focus this year.”

Atha and Kelly shared some of the “flex tangles,” futuristic animals, and parade floss the students have created so far. The projects also include a reflection piece, where students analyze what worked, what didn’t work, and what was frustrating. Projects are also displayed in the library.

The board adjourned to Executive Session at 8:11 p.m. for superintendent interim feedback. The board’s next regular meeting will be held at 6:00 p.m., Monday, February 14, 2022.