“Stop the Uinta Basin Railway Campaign” organizer Meghann Cranford set up a rally this past Saturday evening involving dozens of Central Colorado residents, calling on Secretary of Agriculture Tom Vilsack to revoke the permits for the Uinta Basin Railway. On Tuesday, December 13, members of the campaign will deliver a petition to the Department of Agriculture at 1:00 p.m. EST (10:00 am. MST).

This event is part of a nationwide day of action to resist the proposed new oil trains. There were solidarity actions in five cities and four states including Denver, Colorado; Glenwood Springs, Colorado; Olathe, Kansas; Salt Lake City, Utah; and Sandpoint, Idaho. 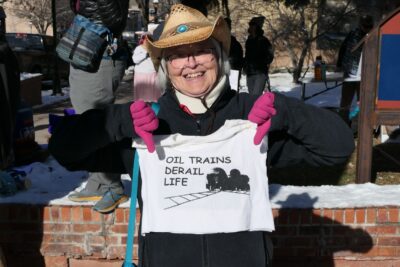 This recently approved 88-mile railway in northeast Utah is continuing to generate objections here in Colorado.

Coloradan have what environmentalists say is a valid concern; oil shale, or otherwise known as waxy crude, being hauled on the rails enroute to the Gulf Coast.

The railway would bring up to 30 loaded, two-mile-long oil trains per week from the Uinta Basin in Utah, through Colorado to refineries along the Gulf Coast. Community members across Colorado are concerned about how new oil trains would worsen the climate crisis and could derail and spill into metro Denver neighborhoods and Colorado’s precious waterways.

For more on the extensive coverage of the Uintah Basin Railway plans by Ark Valley Voice (AVV), follow this link.

“Colorado has some of the worst air quality in the nation. The Uinta Basin Railway project would increase air pollution at the source in Utah and across areas of Colorado where the oil gets refined,” said activist Michael Denslow. “The burning of fossil fuels is the most significant source of air pollution in our area. We simply can not curtail air pollution and expand oil and gas infrastructure at the same time.”

As AVV has covered over the past two years, the heavy, long, oil tanker trains used to transport crude oil pose greater risks of derailment, spills, and fire than other freight trains. In the last 10 years, 21 oil trains in North America derailed, spilling thousands of gallons of oil into the soil and rivers, and ejecting fumes into the air (Sightline Institute).

Many Denver community members have pointed out that the new trains would pass through industrial centers and low-income communities of color already disproportionately impacted by pollution. The project will cause up to 53 million tons of CO2 pollution per year from the combustion of the increased production of up to 14 million gallons of oil per day.

“I am a part of this Stop the Uinta Basin Railway action because I want my kids to have safe water, I want our animals to have safe habitats,” said protester Becky Green. “I want to cut emissions and stop building new fossil fuel infrastructure.”

As has been documented, pipelines leak, trains come off their tracks, and damage to the environment from crude oil spills can take generations to recover.  But as history shows us, trains have also been an integral part of the history and development of the state. Clearly, the debate about this development is far from over.