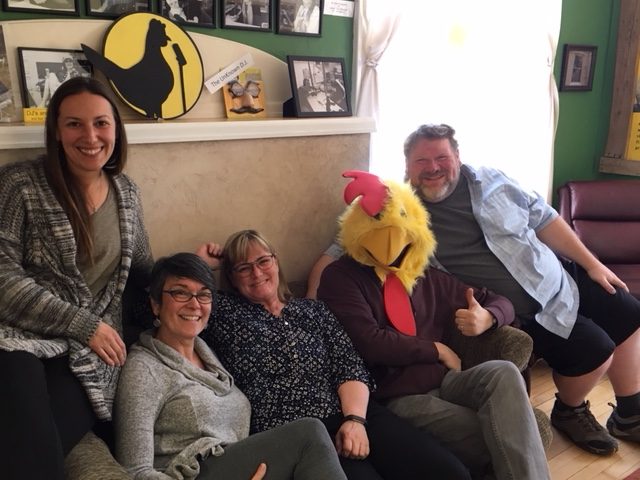 KHEN’s three-day intensive membership drive Wednesday through Friday last week netted the station $10,992, more than the community radio station 106.9 has ever raised in such a short period of time. But the station isn’t stopping there.
“Fifteen thousand dollars. That’s our goal for this spring membership drive,” said KHEN Board Chair Leslie Matthews.
“We’re thrilled with the community support. This is more than we’ve ever raised in such a short time. It usually takes us five to six weeks of effort. The board, community members and staff have really pulled together to make this happen.”
The three-day on-air marathon of community leaders, unique local musicians and community groups was organized and orchestrated by Jimmy Sellars and Mark Monroe, who normally DJ the Fridays at Three show. The format was a first for the station, and the resulting impact continues to build.
This past week, the nonprofit radio station picked up 27 new members, had 54 memberships renewals and 59 new followers of the KHEN Facebook page. The campaign continues through March 30.
“We brow beat them into coming on the marathon,” said Monroe. “I’m kidding, but I think people were inspired. It was a very different way to raise money – concentrated and all day long. We gave them voices they knew and great local acoustic music they heard in a different way – live in the studio. It really made the sustaining memberships a positive, easy option.”
Sellars says he thinks the community audience was just ready for the membership marathon.
“We primed people so they were ready. We had seven bands and lots of interviews – lots of talking.”
Station coordinator Leah Capezio added that it wasn’t just the marathon, it was the huge volunteer effort by the KHEN board of directors and friends.
“The volunteers called the entire membership and that really helped. It’s a lot easier to feel guilty for not renewing or joining when you have that personal contact. Board people like Lisa Marvel showed up with food for the guests. People just dropped by and we put them on air. We’ve given people a lot of triggers.”
Matthews says there was a different attitude in the air before this year’s membership drive.
“Sometime before the drive KHEN started hitting a state of momentum. It began with the community leader cocktail party telling people our plans for things like the station manager and news programming. That really set the stage. I just think there was a buzz about it. Doing new things is good. It grabbed people for some reason.”
“We’re really pleased with the results. This year people are giving more both in KHEN memberships and in donations,” said Sellars, who is board treasurer. “Part of that is because now we’ve set up a sustaining option on the website. People can sign up for memberships or donations that are automatically deducted. That comes to over $4,100 a month between our underwriters and monthly sustaining memberships and donations toward covering operating expenses.”
Matthews, discussing the membership drive with Sellars, Monroe, Capezio and incoming station coordinator Shannon Demuth, said raising $15,000 in one membership drive is a goal the station has never attempted.
“$15,000 would be a big, big breakthrough for us and I think we can do it. We have momentum of leadership. Our board has been more active this year and this is a group of people who have really taken to this.
“We want people to know that our tag line ‘You belong’ really is true. The KHEN drive welcomed people in and you know – they came in. Listeners actually walked in the door and made contact. Another fellow stopped me in a coffee shop and said he’d finally begun to listen to podcasts. It’s taken a while to get people used to the idea that you can listen to a show at a time you choose.”
All those who join or renew by March 30 will be entered in a grand prize drawing for a Salida Stay-cation, to be drawn at the April 6 KHEN Quinceanera (Keen-sin-year-ah) 15th birthday party at the Fun Street Family Arcade, located on F Street in downtown Salida. The prize includes among other items, two free half-day raft trips, a free massage, hotel room, and dinner for two at Shallots.