In the far-right extremist ecosystem, Saturday, March 20 is being billed as a Worldwide Rally for Freedom Day. Some may wonder – freedom from what. But far-right organizers of these rally events include grievances ranging from COVID-19 anti-vaccine sentiment, to opposition to face masks, to the continuing dispute of the 2020 election, to gun rights issues, to their perceived sense that Colorado’s governor might try to limit the consumption of meat. 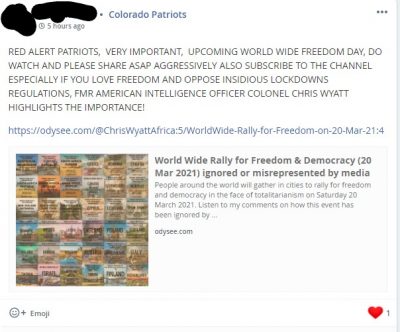 While these groups also claim that mainstream media has ignored their events, memes and event posters have circulated for several days on various extremist social media sites. They feature county and city events billed as freedom rallies.

Not surprisingly, this massive worldwide freedom day propaganda campaign may have had an impact on  extremist groups in Colorado.

The MeWe group Colorado Patriots, a 494 member group posting regular far-right propaganda from such media as, Us Against the Media, The Federalist, and Breitbart, have been promoting the worldwide event with commentary such as (emphasis theirs): “RED ALERT PATRIOTS, VERY IMPORTANT,… ESPECIALLY IF YOU LOVE FREEDOM AND OPPOSE INSIDIOUS LOCKDOWN REGULATIONS”. 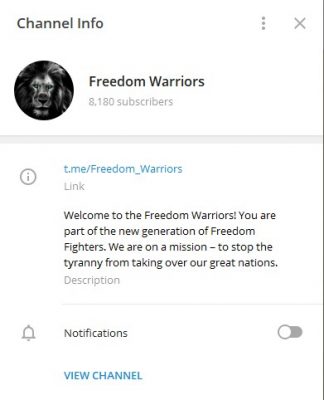 One prominent Telegram Channel (a social media favored by the far-right) that calls itself Freedom Warriors boasts that they are new “Freedom Fighters”. Their symbol, a lion’s head, is familiar: it is used in many far-right social media sites representing the Patriot Party, features dozens of variations on that image.

Each image represents a city, country, or state, that is, in their words is … “Rising Up” and joining the “Rally for Freedom”. Another says their purpose is to “stop the tyranny”.

Similar to other violent extremist group propaganda, Newsweek notes that the rally propaganda is not overtly tied to QAnon. Rather, as other groups have done, QAnon references are subtly and obliquely promoting the rallies.

According to Newsweek, “The Twitter hashtag that the rallies are being organized under is “we will ALL be there”.

“A very similarly worded phrase to the QAnon slogan “Where We Go One, We Go All,” often abbreviated to WWG1WGA.”

Incidentally, the March 20 Freedom Day rally will be competing with numerous other scheduled “Meat in” events organized to protest against Governor Polis’ suggested that Colorado hold a “meat out” day. In February Governor Polis had proclaimed March 20 to be a “MeatOut” day to help raise awareness about the environmental impacts of raising large populations of livestock as well as the health benefits of eating less meat. 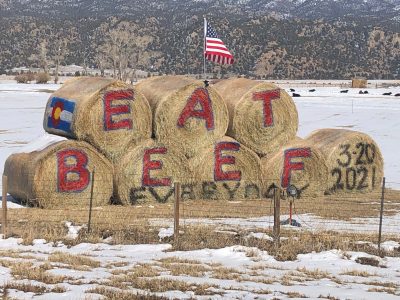 As of March 17, at least 26 Colorado counties have signed their own “Meat In” proclamations and many on the far right have taken rallying cry to organize political events.

The events are being organized primarily in cities and counties well known for conservative leaning. But so far, terminology appears to be benign and centered around barbeques and speaking venues, not active protests.

Georgia Represents Something Else

However, given the mass shooting in Georgia this week that appears to target women (six of the eight killed were Asian women) what might be classified as a hate crime might incite copy-cat action.  The right-wing network has almost immediately turned the incident into a false flag … claiming that he is a plant to create support for more gun control.

Taken along with the increased xenophobic rhetoric pushed by both Republican members of Congress, as well as comments by former President Donald Trump’s appearing on Fox News two days ago, this could incite more dangerous and threatening acts.

Even locally, many patriot groups have encouraged “flag waves” where patriots don American and Trump flags and wave them either from sidewalks and/or from vehicles. Often these in-your-face-patriotism “flag waves” occur spontaneously or in conjunction with another event. Often, this action includes aggressive driving behavior and no shortage of guns.