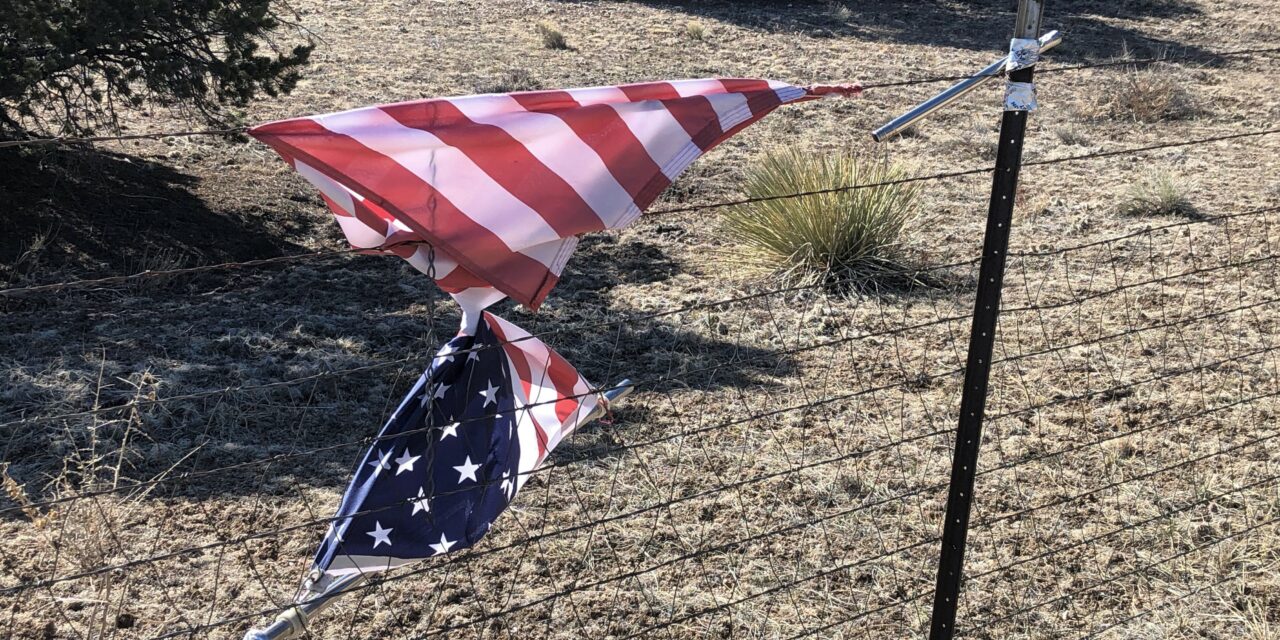 How People are interpreting the Installation of U.S. Flags Along U.S. 285 Varies Widely

While some are saying that they are inspired by the American flags that have appeared on U.S. 285 across nearly half of the length of Chaffee County, not everyone agrees. Many say they are proud of the display, yet other people, both residents, and visitors to the county have expressed concern and downright uneasiness over what they see as the misappropriation of our national flag.

Now, say several people, they are beginning to see an implied purpose to the flags, which are displayed in a way that is a clear violation of the U.S. flag code for the display and honoring of the flag. Flags along the highway have been spotted as ripped, torn, caught on barbed wire fences, and on the ground. They are flying in storms, and all night long without the specified lighting.

A U.S. military veteran visiting the county said he is very concerned about seeing the flags displayed on the highway, in a way that he says desecrates the flag and U.S. flag rules.  “The U.S. flag should never be flown at night unless it’s lit,” he said. “In addition, it should not be flown faded or worn and it should not be allowed to hit the ground. Any of these actions are considered a desecration of the flag. I am really upset to see this.”

A local who hosts Airbnb guests in her home says several travelers have asked about the flags this summer. “Our most recent guest asked who was organizing the effort and said he was concerned that the flags were being flown incorrectly, without lights for nighttime display. I said that I thought it was a local patriot group promoting it, but I wasn’t sure who he could contact regarding flag etiquette.”

Posting on a National Scenic Byway 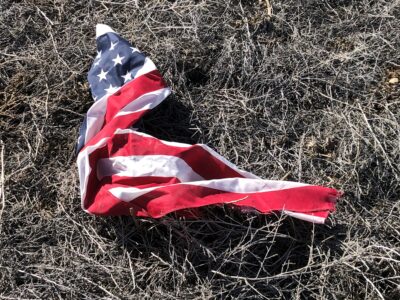 American flag on the ground along U.S. 285. Photo by Stephen Hall

A Salida resident who hadn’t driven north on U.S. 285 for a few weeks expressed concern over their proliferation. He added that the fact that the flags continue to appear in ever-increasing numbers along the Collegiate Peaks National Scenic Byway, which per the Highway Beautification Act is supposed to be message-free, is just another reason for uneasiness.

“We have legislation about putting billboards on scenic highways,” said a county resident who asked to remain anonymous, concerned over backlash. ” It’s on a scenic byway that has been specially carved out for its scenic beauty, and it’s there like some sort of clue. As a neutral person who doesn’t take political sides, it’s discomforting and distracting. You start counting poles and not watching the road or the scenery. Besides there being a safety thing, it casts a shadow on this county.” 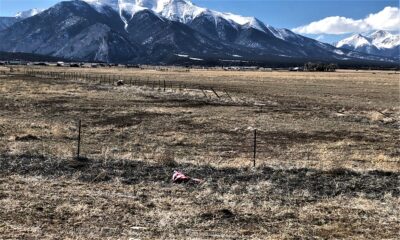 The same American flag on the ground along U.S. 285 with the Collegiate Peaks in the background. Photo by Stephen Hall.

The flags began appearing along the road in one small portion of the county, put there, says Kaylee Davis, as a patriotic gesture by her mother, Shelby Davis. The funds for the first flags came from her own pocket and were put up by her, her family, and friends. She says she is not associated with any group, party, or any other affiliation, “just an American who cares deeply about her country.”

“My mother was inspired to put flags up along Highway 285, to show her love for our country, love for those who have sacrificed their own lives to give us the freedom we so enjoy, to honor her own son who served in the military,” said her daughter. “As of now, donations sent to secondary parties have not been received by her to cover the cost of the flags and materials to install them.”

It’s what happened next that has folks wondering exactly what is going on and what message is actually being sent.

Soon after Davis’s personal statement, flags began multiplying all the way from the unincorporated county land on which the Oak Leaf solar farm sits just outside Poncha Springs, to past Nathrop. Those flags, says Davis, were not put there by her mother.

Facebook posts in “WhatsHappeninginBV” discussed the flags (many comments since removed), and it was clearly a divisive issue.

Nor is her mother or their family in any way involved in a GoFundME page that was put up nearly a month ago by Danny Nachtrieb (who also happens to be one of the gatekeepers of the Chaffee Patriot group),” said Davis. They ask for money to extend the flag display. Davis said her family hasn’t seen a dime of that money.

It has been reported the Chaffee County Patriots have been extending the flag display. Their reasons may not necessarily be for the reasons Davis first put up her own flags, although Chaffee Patriots President Dennis Heap has been quoted as saying that “people who love America have been in awe, wept, joyous and filled with hope” when they see the miles of flags. The group has announced plans to put up flags all the way to Leadville and Fairplay.

“We considered flying an American flag at our gate at last November’s election and at the recent July 4 but decided not to,” said one reader who contacted AVV. “We felt that people would interpret our flag as support for Republican candidates and Donald Trump. Trump Republicans have hijacked the American flag for their own partisan purposes and they’re trying to change its meaning.”

“When we flew our American flag after 9/11, as so many Americans did, everyone’s message was about national unity and mutual support,” she added. “But recently when driving between Nathrop and Poncha Springs past all the ranches with a flag in every fencepost, it finally became clear why that makes us uncomfortable. Their message is, ‘We’re the real Americans – and you are not!’ The message is exclusionary and divisive, not inclusive and welcoming.” 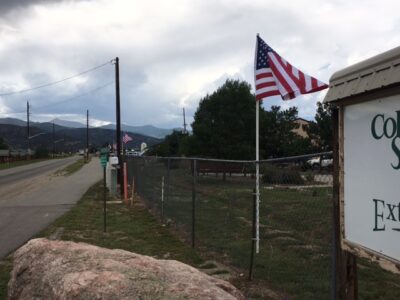 Flags went up along the border of the Chaffee County Fairgrounds timed with the start of the fair. AVV photo.

“I hadn’t driven south on U.S. 285 for some time, so I just saw the flags a week ago,” wrote another AVV reader. “The flags seem to be on the same properties that posted Trump signs last fall.”

AVV cannot verify that that is the case. But it has reminded our readers that the American flag is our national symbol, it is considered a living being, and there are strict display rules for the display of the American flag which are being broken by these displays. Republicans or Chaffee Patriots don’t have a corner on loving our flag or our country.

The display of flags along state and county highways in this county is not occurring in a void; it coincides with other activities that have occurred in this county; the sudden evolution of the Chaffee Patriots (with at least one tie to the Three Percenter Militia group), as well as a right-wing extremist element that surfaced last year prior to the 2020 elections, and the Jan 6 violent insurgent attack on our United States Capitol. This was followed by major claims by county commissioner candidate Hannah Hannah of (non-existent) county voter fraud, continued by a disgruntled voter and some prominent county Republicans, and an effort by Dist. 60 Representative Ron Hanks to attempt to force a Colorado election audit.

A few readers have contacted Ark Valley Voice expressing their concern that our national flag is being turned into a symbol of intimidation. “It looks like a family’s personal conviction might be being co-opted by a group that is not just political, it is potentially threatening,” said one. “It’s in your face. It feels like our flag is being turned into a rejection of other people’s legitimacy — anti-immigrant, bigoted — like there’s a corner on belonging and patriotism.”

Most recently, a filing has been submitted to make the Chaffee Patriots a 501(c)(3) tax designation; for what social good, is not readily apparent. (But the Oath Keepers Militia group has already been cited for “abusing the U.S. tax system” by posing as a charitable nonprofit.)

Supporters of former President Trump, including QAnon members, have promoted the idea that he would be reinstated by this August, and announced that a process is underway to pick his new cabinet.

The world has had more than one example of symbols being usurped by authoritarian groups and messianic leaders.

It begs the question; is an attempt underway to repurpose our American flag, which has stood as a symbol of a country united around liberty and justice?