Our Voice:100 Years Ago Today Women Got the Vote

On this day 100 years ago, Aug. 18, 1920, it is possible that my great grandmother, my two grandmothers, and my great aunts did not realize its significance.  News traveled slower then; they had weekly newspapers, and they didn’t have radios. In fact, at that point in time, they didn’t have electricity and had just gotten brown, wooden telephones that hung on the wall, with the rural party lines to go with it.

So they didn’t know that the last state had just ratified the 29th amendment to the United States Constitution, giving women the right to vote. 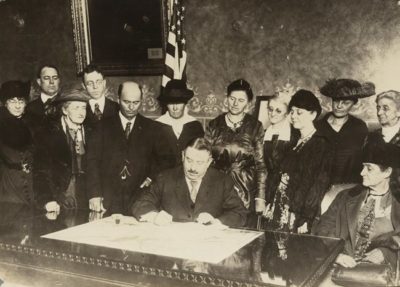 Colorado’s Ratification of the 19th Amendment on Dec. 12, 1919. Group of women from National Woman’s Party crowd desk during the signing of the ratification by Gov. Oliver Henry Nelson Shoup (Photo Courtesy of National Parks Service)

The Nineteenth Amendment’s adoption was certified on August 26, 1920: the culmination of a decades-long movement for women’s suffrage at both state and national levels.

My great grandmother  Julietta Elizabeth Engel Young was a Normal School graduate, who lost her husband in the 1918 Spanish Flu epidemic. Although she quietly advocated for the passage of the right to vote for years, at that moment she had her hands full trying to raise four of her five children alone on a farm without the conveniences we take for granted today. Both my grandmothers had young children, including my mother who was then just a baby. Both were farm wives; partners in their family’s agricultural enterprises.

But that fall, in that election, they voted for the first time.

As a little girl, I remember asking my grandmothers about that first vote for a school project. Grandma Johnson was typically outspoken and brief; “It was about time,” she said emphatically. “And that’s all I have to say.”

Ark Valley Voice celebrates those who fought hard for the right to have their voices recognized, and we celebrate the quiet women too, whose rural lives were still hard; but whose voices were finally heard.

There remain more voices to be heard who have had little opportunity to be represented. There are voices coming up behind us whose voices are just beginning to be heard. This is not over.