When former Secretary of State Colin Powell died Oct. 18 from complications of COVID-19, combined with multiple myeloma, for which he had been undergoing treatment, and Parkinson’s Disease, he had racked up a number of “firsts” that seem improbable in a short 84-years. Even more improbable is his rise as a minority child of Jamaican immigrants to the highest levels of government, and a respected role on the global stage.

He did two tours of duty in Vietnam and was the first Black to be appointed Director of National Security and the first African-American Chairman of the Joint Chiefs of Staff. During the 1990s he enjoyed such strong public support that there was talk of him running for president. Then he was tapped to be the first Black Secretary of State. 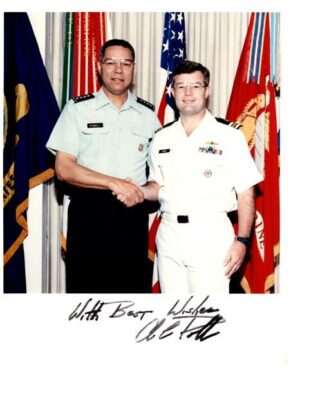 “At his innermost soul he was a soldier,” said local Chaffee Commissioner Keith Baker, who worked for Powell during a memorable stint at the Pentagon while Powell was the Chairman of the Joint Chiefs. ” I managed a program called the Chairman’s International Fellows program. It was the international military education and training program, where officers from foreign countries come to attend our war colleges. Most classes have at least one or two international officers, so you have a good mix of people to discuss issues and strategy.”

Baker says that in that capacity, he worked directly with  Powell. “It was his program. That was in summer, 1993, so it hadn’t been very long after Desert Storm. He’d already been our National Security Advisor. You have to know, he was a rock star… you could see the awe and the respect and the admiration for him from everyone, including the international officers in the program. He truly was an excellent diplomat for the United States and everything that is good about the U.S.”

Baker says that Powell’s presence dominated a room. “He was a big guy and there was a physical presence about him. There could be 300 people in the room, and Powell stood out. You’ve seen him speak… he handled himself extremely well. I would say he was very forthright, kind, and compassionate. He probably could explain the meaning of life to somebody if they really needed it, but I never saw him raise his voice. He never got angry. He was always even-tempered.”

If anything, notes Baker, the administrations Powell worked for underestimated him. “The general attitude that [Vice President Dick] Cheney had … whenever General Powell would try to do something, they would reign him in…to clarify, to walk it back … I don’t think he was ever treated as the Secretary of State he could have been.”

Baker’s work experience with Powell underlies the regret he knows Powell had about his role in moving the U.S. into the Iraq War with faulty information about the presence of weapons of mass destruction. His speech before the United Nations Security Council became one of Powell’s most profound regrets in an otherwise stellar career.

“He did go to the CIA, he had a workroom over there,” added Baker. “But they stacked the deck… he didn’t see everything. He was deprived of the best intelligence.”