As brutal winter weather grips Ukraine, Russian President Vladimir Putin is continuing his relentless bombing of Ukraine’s energy infrastructure. It’s as if he is attempting to freeze the neighbor he invaded (without any provocation) into submission, or at least into human icicles. It gives new meaning to the term “bad neighbor”.

This past week, Ukrainian President Volodymyr Zelensky reported that more than ten million residents of his country are without power for heat, light, or water. It is estimated that Russian drone attacks and missiles have wiped out more than one-third of Ukraine’s power grid, causing rolling blackouts and cutting off electricity to households and apartments. 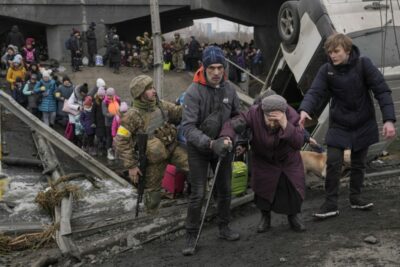 An elderly lady is assisted crossing the Irpin River on the edge of Kyiv, after the bridge was destroyed.

A U.S.-based mission has launched a massive ‘heat and hope’ project to rush generators and critical supplies of firewood, coal, and thermal blankets to local churches helping Ukrainian families facing a brutal and potentially deadly winter. The Ukraine Winter Heat and Hope Project, organized by Illinois-based Slavic Gospel Association (SGA, www.sga.org), is partnering with hundreds of local churches persevering to make sure displaced and desperate Ukrainians “stay warm and find hope” during the expected winter freeze.

SGA’s lifesaving project will help local churches across Ukraine turn their facilities into “centers of heat and hope” where families can shelter and stay warm when the bitter cold rolls in.

“The need is huge, and the crisis is upon us,” said the leader of the Ukrainian Baptist Union Pastor Igor Bandura, representing more than 2,000 churches across the nation of Ukraine. “The spirit of Ukrainians is still strong. Our people are not in panic, but thousands are struggling.”

As the crisis deepens, reports are that Ukraine’s churches are filling the void. “Our churches are full every Sunday,” said Bandura. Relying on this SGA support, churches across Ukraine are already delivering food parcels and providing millions of meals.

As the Heat and Hope Project ramps up in the coming weeks, blankets and generators will be shipped from neighboring Germany and Poland, while firewood and coal will be purchased locally in Ukraine for distribution.

SGA’s evangelical church network — cultivated over nearly 90 years through communism and the Cold War era — is “the most effective, grassroots way to get aid to the people who need it the most,” said the organization’s president Michael Johnson.

“This is one of the biggest humanitarian crises in Europe since World War II,” he said. “It’s more than just a ‘cold war.’ Millions are about to face frozen temperatures, and without our help, they’ve no way to keep warm. The most vulnerable could die.”

Founded in 1934, Slavic Gospel Association  helps “forgotten” orphans, widows and families in Russia, the former Soviet countries of Eastern Europe, Central Asia, and Russian-speaking immigrants in Israel. It is a extensive grassroots network of local missionary pastors and churches in cities and rural villages across this vast region.

One story from Radio Liberty demonstrates the dire circumstances of more than 1,100 towns and cities completely without power across Ukraine such as this:

Iryna, who lives 90 miles north of Kyiv, has been stockpiling as much firewood as she can afford to buy. “We got the cheapest they had at the sawmill,” she told Radio Liberty. “Good firewood costs at least ($165) per carload.”

Some of her neighbors are chopping up furniture or dismantling outbuildings so they have wood to burn. Others are hastily making wood-burning stoves out of scrap metal.

People can support the Ukraine Winter Heat and Hope Project at www.sga.org.

Editor note: According to irs.gov, Publication 78, SGA (EIN 36-2428314) is a nonprofit corporation incorporated in Illinois. According to its independent auditor’s reports, “SGA is exempt from federal taxes under section 501(c)(3) of the United States Internal Revenue Code (code) and comparable state law, and has been defined as a publicly supported organization that is not a private foundation under Section 509(a)(1) of the code. Contributions to SGA are tax deductible within the limits prescribed by the code.”

Readers are encouraged to seek independently verified data, IRS Form 990 tax returns, and to do their own due diligence with any charitable cause. Useful tools include Charity Navigator and Candid/Guidestar, among others and the Colorado Secretary of State Charities database for local charities.