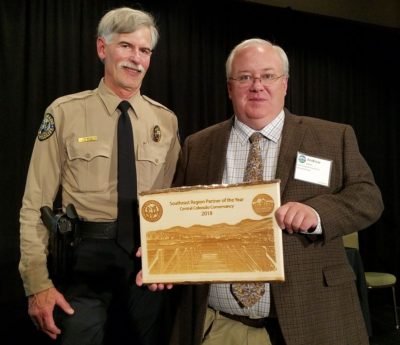 In his nomination, White praised the Conservancy for its many years of partnering with CPW and the AHRA “to help meet our mutual goals of protecting, restoring and providing access” to open spaces and the Arkansas River.

“The Central Colorado Conservancy has become the go-to entity for a number of organizations, agencies and individuals in Lake, Chaffee and Fremont County for conservation and habitat restoration-related projects,” said White.

The Central Colorado Conservancy is a nonprofit group founded in 2001 and dedicated to conserving the land, water and wildlife. It partners with landowners, agricultural producers and residents in Lake, Chaffee, Fremont, Park, Saguache and Gunnison counties.

White listed a number of projects the Conservancy has partnered with CPW and AHRA to complete. An example is their collaboration; protection of the Reddy and Paddock State Wildlife Areas in Lake County. The Conservancy holds the conservation easement on the 175-acre private property while CPW holds a public access easement.

In another case, the Conservancy and CPW co-hold the conservation easement on the 507-acre Chubb Park Ranch State Wildlife Area in Chaffee County. This property is open to public hunting.

“By preserving ranchland, wildlife habitat and waterways, the Central Colorado Conservancy has proven to be a friend and valued partner to CPW and AHRA,” said White. “The Conservancy doesn’t just buy property. It does the hard work of restoration on land and watershed health programs. It is creating a true legacy of conservation that helps CPW and all residents of Colorado.”