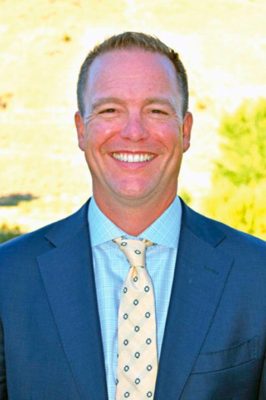 In a three to two vote, with Council Member Jane Templeton absent, the Salida City Council voted to retain Salida City Administrator Drew Nelson while adjusting his annual salary to $125,000. The vote comes after a solid performance review, done by a third party consultant, which included dozens of interviews with staff and citizenry about his performance.

“We had no idea of the looming audit fiasco he was walking into,” said Council Member Dan Shore. “He’s been in this job seven months and he bailed us out, Where would we be today, particularly the audit, if he hadn’t navigated so skillfully. We’re seeing leadership we haven’t seen in quite some time. He’s exceeded the expectations.”

Templeton, who was out of the country, provided a written letter of support for Nelson remaining as city administrator, read by Council Member Cheryl Brown-Kovacic.

Council members Mike Bowers and Justin Critelli cast no votes, consistent with their stance for the past several months. “Everyone knows of my opposition at the hiring,” said Bowers. “ I’ve received complaints and threats concerning my position. Mr. Nelson has made a true effort, but that doesn’t excuse we’ve listened to over 200 women in meetings asking us not to continue with the employment.”

“If Mr. Nelson did anything other than a great job for the past six months we’d have nothing to talk about,” said Critelli. “I had no doubt that once he punched in that he’d do a great job. My question was emotional tools and mental stability.”

“My experience of the last six month with comparisons for the year before could not have been more different [than the past],” said Council Member Harald Kasper. “We’ve really had an administrator that is fully part of the team. He picked up the ball, organized, made connections and brought us suggestions for the next step. That’s what a city admin’s task is,’

‘I did get some feedback from citizens – two groups,” continued Kasper. “The group still reminding me of the February [incident in Winter Park] last year – a bigger group that urged us to reward our administrator and keep him in the city. I believe our task is really looking at how he has performed for the city.”

Brown-Kovacic added her support, saying, “I maintained a positive, optimistic attitude despite negativity from some. I’ve been in contact with Salidans and have had two consistent messages: that ‘all people deserve a second chance’ and ‘if he is doing a good job, he should stay.’ Well, he has done not just a good job, but an outstanding one.”