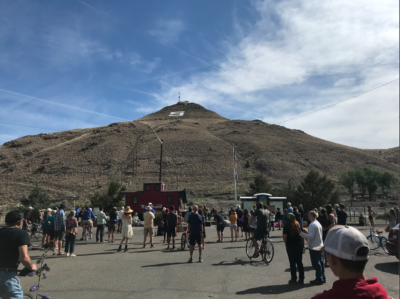 The community gathered to celebrate for William Anthony Chapman. Photo by Brooke Gilmore

On Friday June 26, the community gathered at the bottom of F Street to remember and celebrate William Anthony Chapman, a familiar and beloved Salida figure. Salida residents may have seen him sitting on the caboose at the end of F Street the past several years.

Chapman was born October 1, 1964 and died June 20, 2020. Chapman was an urban traveler whom many Salidians knew and loved. Around 130 people gathered to remember Chapman.

Chapman leaves behind his mother, who resides in California and a son living in Washington D.C. He has hundreds of friends all over the county.

Former pastor of the Presbyterian church, Mike Orrill told Ark Valley Voice “All of us knew a little bit about him, little bits and pieces but none of us knew him completely. We all have known him as an extraordinarily generous man, extraordinarily friendly man, kind man.” 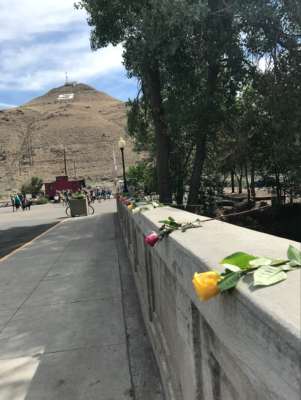 Members of the community set out flowers across the bridge for Chapman. Photo by Brooke Gilmore.

“What was the amazing thing about him is that people saw him as a human being, not as a homeless man. Just a man, beautiful and flawed like any of us.”

Orrill went on to say, “I think the biggest message that is sent with something like this; one of the gentlemen here who was homeless with William said ‘We’re not bad people, don’t judge us’”.

Chaffee County Housing and Health, who Orrill now works with, has recorded stories of Chapman and plans on sharing them with his mother and son.