In their first meeting of the new year this week, the Buena Visa Board of Education heard from town representatives and law enforcement to learn more about their relationship, got updates from the district’s principals on their respective schools and activities, and received an update on Learning in Recovery from Superintendent Lisa Yates.

The meeting was called to order at 7:15 p.m., and the agenda was approved after an amendment removing item 5.2.1, Audited Financials. Financial Director Janice Martin said the next meeting would include the amended budget.

Police Chief Dean Morgan and School Resources Officer Megan Mitchell presented their work with the schools, discussing the various training and points of engagement law enforcement have with the district. Chief Morgan began by talking about Standard Response Protocol trainings that they can do with staff, students, and law enforcement to better prepare for active shooter response and said that he and Yates are working to plan training sessions for large and small-scale events.

School Resource Officer Mitchell shared some of the presentations she does with students of all ages. Elementary students learn about what’s on her belt, what gear she carries, bicycle safety, “stranger danger”, and how to call 911. Middle school students learn about the Bill of Rights and how it interacts with her job, and high schoolers learn about the laws around sexting as well as what you need when or if you get stopped for a traffic offense. The high school special education students get to visit her patrol car to play with the lights and buttons.

She also talked about Shop with a Cop, which she does every year. “It’s for six fourth-grade students, usually students who have had bad interactions with law enforcement in the past or they just really need a win, need something,” she explained. The activity is community-funded. “We take them out shopping and buy presents for their entire family for Christmas, and with whatever’s leftover we get presents for them, as well.”

The board shared their updated plans for the district’s surplus properties. 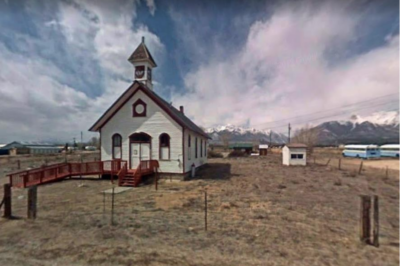 The Nathrop Schoolhouse has been sold to a local buyer and will have its historical integrity preserved. It will be repurposed for community use. Photo from the BV School District, September 2021.

The board heard several offers but decided not to pursue anything for the Maintenance Building. The District Administration Building and the McGinnis Gym may be sold to a buyer for historical preservation, then may sell the restored properties back to the district to perhaps be shared with the town for community use.

When asked about the prospective buyers for the gym and the administration building, Hachmann and Yates clarified that they would lease the building back to the district to own.

“We knew that we were going to spend maybe up to $1 million to demolish that, and so when you have a partner that is ready to look at rehabbing, that’s what kind of engaged them,” Yates explained. “Why not spend that money on something that could be used for both the district [and the community]?… We had determined that we don’t need another gym, so it’s really just reusing our money to rehab.”

Mitchell explained that the potential buyers could rehab the buildings using state and federal historic tax credits, with that deducted off the top when the district buys it back.

Town Administrator Phillip Puckett said that the town is managing properties strategically to accomplish goals that have been on their agenda for several years, including a new police station, new town hall and boardroom space, and selling the fire station. He emphasized that there are opportunities for the town and the school district to collaborate on sharing spaces. He also commented that the town looked into a similar option regarding selling the Buena Vista Heritage Museum to a private entity for historical purposes and then leasing it back, but decided not to pursue it.

Planning Director Joseph Teipel said that the town is looking at adjusting their development application process to move more fluidly, going through a code audit around housing affordability to understand what options are available, and working on the Carbonate Street development to support more attainable housing, childcare, and commercial development. They’d like to work with the school district on some of the building planning to support childcare and housing needs.

Yates asked about the possibilities for childcare in town. The preschool currently has a total of 79 kids on their waitlist due to the difficulties of the small adult-to-child ratio. Puckett said that there are some potential options, including a new Montessori school.

“They have expressed, as part of their vision, expanding their age range over time,” he said. “The trustees are responding to general community needs and how to use mixed-use zoning.”

Teipel echoed the desire to communicate and plan together, recognizing that the environment is changing and that the conversations are going on now about what age ranges would be served in that space.

“Thinking about the capacities of whatever preschool space we have, we want to collaborate and overlap,” Hachmann added, “but we don’t want to create a preschool space that then overloads our kindergarten which we don’t have space for.”