About 12:30 p.m. EST, Tuesday, Dec. 3, the Congressional report on the impeachment inquiry came out. The full text of the report is available here. While the number of impeachable offenses to be included has been speculated about for the past two weeks, in the end the leaders of the Congressional Intelligence Committee decided to narrowly focus their work on two charges.

The report cites two instances of improper conduct by President Donald Trump. They include: obstruction of the House of Representatives’ inquiry and withholding aid from Ukraine on the condition of investigating a Trump political rival. The report concludes that Trump solicited foreign election interference.

The report asserts that Mr. Trump’s “scheme subverted U.S. foreign policy toward Ukraine and undermined our national security in favor of two politically motivated investigations that would help his presidential re-election campaign.”

Impeachment is described in Article II Section 4, of the U.S. Constitution; carried out as a proceeding by the House of Representatives, with the Senate, led by Supreme Court Justice Roberts, acting as court to vote for removal. But the exact process is not spelled out in the constitution, leaving it to Congress to establish a working process. An overview of that working process is laid out here by The New York Times. 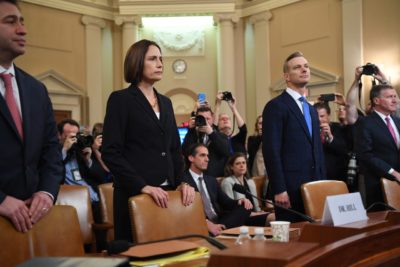 In impeachment, a duly-elected legislative body levels charges against a government official. Impeachment does not in itself remove the official definitively from office; it is similar to an indictment in criminal law, and thus it is essentially the statement of charges against the official. In its 243 year history, only three U.S. Presidents have been impeached and one (Richard Nixon) left office upon the news that he would be impeached and likely removed.

The impeachment report has been published only one day before the House Judiciary Committee is scheduled to take up its work on Dec. 4. Based upon the discovery process conducted by the House Intelligence Committee, the Judicial Committee will now determine what, if any, charges it will file as cause for impeachment.

The House Judiciary Committee may call other witnesses not requested by the House Intelligence Committee. This phase is different than the earlier discovery phase, in that the President and his representatives have been invited to appear during the proceedings, to weigh in, and to suggest witnesses. The President has so far declined, and the House has given him until the end of this week to respond.

Rather than remain silent (or presidential) on the issue, Trump has proceeded to rail against the process in what Kurt Bardella as an NBC News THINK contributor  refers to as “public melt-downs”. Both in public and via tweet, he has called the inquiry ‘fake news’, a ‘witch hunt’, ‘a sham’, and other unsavory words. He has conducted bizarre tweet attacks on career foreign service officers who have appeared as witnesses, while they were testifying, in actions which could be construed as witness intimidation.