Let’s be honest. Most of us gobble down the turkey dinner on Thanksgiving Day, watch the Thanksgiving Day parade in New York City, and then dive into the football game lineup. 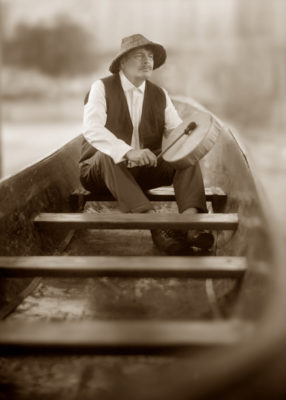 Jeffrey P. Smith, Makah, beats his native drum in a carved Haida canoe by carver Saaduuts, in Seattle, Washington. Photo by Buena Vista resident John Graybill, of the Descendants Project. John is the great-grandson of famed early west photographer Edward Curtis and he is tracking down the Native American descendants of his ancestor’s photos to photograph them as they are today.

Unless it’s incorporated into our Thanksgiving blessing, few of us give more than a passing nod to the stories of the first Thanksgiving shared by the pilgrims and the Native American Mashpee Wampanoags; part of a political arrangement that quite literally helped them survive their first winter in the new world.

Fewer still recall the proclamations made by our first president (George Washington) or our 16th president (Abraham Lincoln) establishing (then reestablishing) a November national day of thanksgiving.

Even fewer of America’s residents stop to consider who lived on the land where our homes or apartments, or farms and ranches are now located. Friday, Nov. 26 is Native American Heritage Day. This is a good time to discover which tribes occupied your home place before miners, farmers, business interests, speculators and broken treaties drove them off their ancestral lands to the reservations. There are now 574 recognized Native American tribes recognized by the U.S. government in North America.

For those at all curious over who resided on the land where you now live, just text your zip code to 907-312-5085 to find out who was here before you. Once you find out, consider learning more about that tribe, its people, and how they lived. It’s a way to grow closer to the land you walk upon, and those who came before you.

For instance, if you are area code 81236, you live on what was once Núu-agha-tvu-pu land. In other words: Ute.

While some enthusiasts encourage us to add an acknowledgment of these tribes to our email signature, other historians would just be thankful that we bothered to learn one small piece of the previously ignored or suppressed stories that came before us.  The result is not only better history, but perhaps a better path forward for our society.