The September Greater Arkansas River Nature Association (GARNA) annual fundraiser and 25th birthday celebration on Sept. 12 will be a special occasion as the organization presents a Lifetime Achievement Award to long-time contributor and visionary Steve Reese. 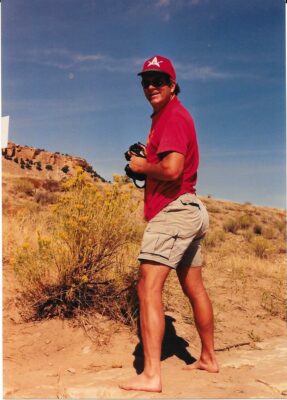 GARNA is honoring the long-time contributions of Steve Reese. This photo taken in southern Utah in the 1990s, shows Reese out in nature, his favorite environment. Courtesy photo.

The AHRA, which stretches 148 miles along the Arkansas River from Lake County to Lake Pueblo, was created in 1989. Reese was one of only two AHRA employees. He played a key part in implementing the agreement that allowed the Bureau of Land Management (BLM) to maintain ownership but put management in the hands of Colorado State Parks.

“The early days were a bit chaotic and challenging. From the beginning, in the middle of all that chaos was the very reason that GARNA had to be an outcome,” he says.

He explains that with so many interests, including landowners, fisher people, commercial outfitters, private boaters, local agencies, environmental groups, and water users (which Reese points out is all of us), wanting “their part of the river, the part that was important to them,”  the interest groups were competing.

But these interest groups came together as the dynamic AHRA Citizen Task Force. “They had a real impact on what and how things were accomplished,” says Reese, who managed the group.

A few years later, after the high demand issues had been addressed and some agreeable results had been achieved, Reese reached out to Kathryn Wadsworth, a river ranger on the Arkansas River at the time, to see if she would help organize people seeking to merge their interests and ideas about the river.

“We wanted to see if we could accomplish more outside of the park structure,” he says. “It really was that wide open, except we had several years’ worth of issues that mattered to people and Kathryn was familiar with all of them.” Wadsworth reached out to the community, seeking people with common interests who shared the desire to protect the river and their place along [the river]. “It started to work,” says Reese. “Of course, it did! From here GARNA began to take off.”

“Steve was and is the reason GARNA exists,” says Wadsworth, who still calls Salida home. “He is a collaborator. He knew the value and potential that a stand-alone nonprofit nature association could bring to the table. He knew the ultimate success of the AHRA would require an outside organization to help the natural resource agencies educate and engage with the area’s citizens.”

According to GARNA, Reese’s vision proves even more important today as visitors flock to the Arkansas Valley in record numbers.  It continues to partner with AHRA to provide the annual Headwaters Institute, educating new raft guides about our valley, the annual Clean Up-Green Up on Colorado Public Lands Day, and more recently, employing large-scale volunteer efforts to understand, record, and mitigate the impacts of our valley’s growing outdoor recreation usage along the river corridor with the Envision Recreation in Balance project.

“In addition to other key natural resource agency managers and many local volunteers, Steve provided the foundation that is still allowing GARNA to be an important voice at the table,” says Wadsworth. “His commitment to our natural, cultural, and historical resources is unmatched.”

“Why all of this? It’s obvious, isn’t it?” says Reese. “The Arkansas River connects everybody to everybody else. We need to be connected. That’s why I thought GARNA was, and still is, so critically necessary. I knew that GARNA could be a key part of making this community part of AHRA’s river management.  That’s what I thought anyway. Kind of grandiose, wasn’t it?”

Reese was right. Since its inception, GARNA has expanded its focus to provide ecological and life-changing programs and opportunities in environmental education, stewardship, and sustainability. GARNA currently reaches 5,000 visitors and residents each year through public programs and touches the lives of over 1,600 rural youth per year in Chaffee and Lake Counties through field trips, camps, and other programs.

GARNA also manages the largest group of volunteers in the Upper Arkansas River Valley and is currently working with the county to determine waste diversion needs and opportunities, and a plan to best accomplish and sustain the community’s recycling-related objectives.

The GARNA 25th birthday bash is set for 4:00 p.m. to sunset, on Sept. 12 at River Runners in Buena Vista. Those who purchase VIP tickets will launch upriver at 3:00 p.m. and float into the event on a raft where they will enjoy a champagne welcome party upon arrival.

Tickets are on sale through Sept. 2. To purchase tickets for the GARNA 25th Birthday Bash Fundraiser go to: https://bit.ly/garna25bdaytickets.