Heart of the Rockies Regional Medical Center employees seem to be increasingly satisfied in their work, according to a new staff survey, and employee retention is being closely monitored.

Those were part of the conclusions given the Salida Hospital District Board of Directors Tuesday from Barb Lutz, HRRMC compliance/grievance officer summarizing a three-week online engagement survey of staff from Oct. 22 to Nov. 12.

Lutz noted several improvements from a 2017 employee survey in areas including employee engagement and utilization of their skills, and staff saying the organization is providing good, safe patient care.

The engagement survey registered a 4.11 rating out of a possible 5, and represents an improvement from the 37th to 45 percentile of the National Health Care average.

Department managers will develop teams and action plans to address the two lowest-scoring items on the survey, and by March 1 are to have action plans underway to improve the lowest marks by at least two percentage points by the next survey.

Lutz also reported that the employee turnover rate, pegged at 15.1 percent in 2018, and a rolling 12-month average of 16 percent, is trending up and being monitored. 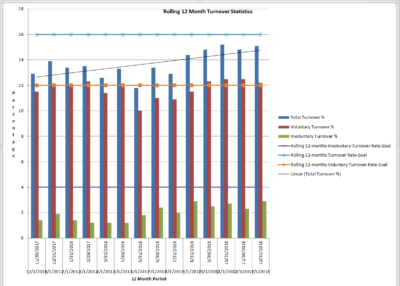 A 2019 strategy will include interviews with current employees to learn reasons why employees stay or leave HRRMC, said Lutz.

CEO Bob Morasko spoke on concerns over wait times for transport of psychiatric patients by Chaffee County Emergency Medical Services. He said the hospital has a contract with EMS for services that include psychiatric transfers. A graph showed transfer times from just under an hour to more than 13 hours. A letter has been sent to EMS, it was noted.

The board also learned the opening of the expanded hospital Outpatient Pavilion under construction will be further delayed until May 1, partly due to weather.

In other action, the board learned:

– the exercise equipment earmarked for the hospital outdoor trail has arrived and plans are being made for installation.
– Staff are working on an effort to positively impact reimbursement for outpatient services. A two-pronged approach will include negotiating with Medicaid on improving reimbursement for medications, stimulators and implants; and State Sen. Larry Crowder will be asked to write legislation to support Colorado Medicaid returning to cost-based reimbursement for outpatient services, from the recently-enacted Enhanced Ambulatory Patient Grouping-based reimbursement, designed to reduce costs; so-called value-based care.
– Information Systems is reviewing health industry cybersecurity threats and threat management regarding patient and organizational health information and has multiple strategic initiatives for 2019.
– A $5,000 donation from the Colorado Grand car show sponsored by Salida Noon Rotary Club will be used to purchase a smartboard as well as a software package for the hospital Incident Command Center, which handles emergency situations.