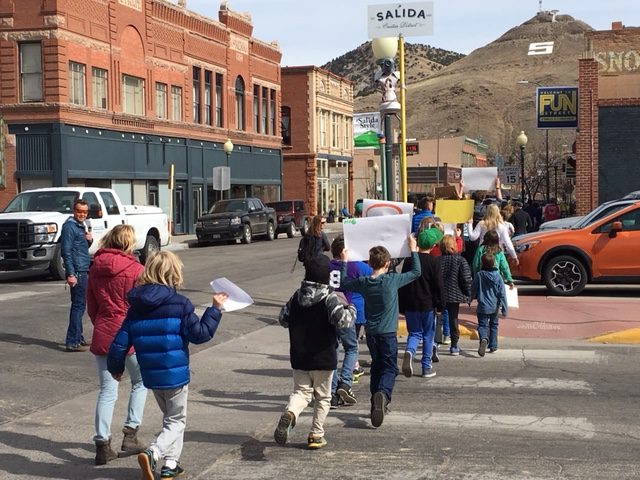 Chaffee County schools joined school districts nationwide in the student walkout today, March 14, protesting gun violence. Students from some 3,100 schools across the nation organized as a part of the #NeverAgain and #Enough National School Walkout campaigns.

About 75 students walked out on the football field at Salida High School at 10 a.m., sitting silently for 17 minutes – one minute to honor each of the 17 students and staff killed in the Marjory Stoneman Douglas High School massacre in Parkland, Fla., a month ago. Parents and interested community members stood along the fence line in support of the student effort.

Inside the school, there was a more personal expression. “Some of the students wanted a more human element, so they printed off pictures of the students who were killed. They wanted a face with a name,” said Salida School District R-32-J Superintendent David Blackburn. “They wanted to reflect on real people – to think about them, pray for them. It was a student effort; they organized it.”

Chaffee County students joined thousands of other Colorado students from Colorado Springs, Denver, Littleton, Golden, Arvada, Boulder, Greenwood Village, Pueblo and others in expressing their demand for an end to school violence so they can feel safe in their schools.

The demonstration at Columbine High School in the Jefferson School District included Tom Mauser, father of Daniel Mauser, one of the 13 students killed in the 1999 school shooting that brought national attention to the problem of gun violence in the nation’s schools.

In a separate Salida demonstration, around 25 fourth- through eighth-grade students from the Salida Montessori Charter School, together with their teachers and the business office administrator, held a march through town. The group marched from their school, located at 349 E St., along F Street, across the F Street bridge to the caboose and back to Montessori School. Their chant of “No more gun violence” echoed down the street, bringing retail shop owners and their patrons to the street to see what was going on.

It has been 19 years since the Columbine shootings. A generation of students have been born and raised since that time – tucked into car seats, secured with seat belts, protected while skiing and biking with helmets, and told not to text while driving. But national efforts to ensure the safety of the next generation has stopped short of tighter firearms regulations.

Blackburn said that schools walk a fine line. “We won’t take a position on the issue, but we knew we needed a way for the kids to speak out in a safe way.”

He shared a message sent by the school administration to the teaching staff: “Our No. 1 concern (was) safety, and a second concern was our duty to help students process life. … A last concern was teaching our students how democracy can work and teaching them how to let their voices be heard in a rational manner. I know not all students engaged this topic, but it is important for the older students.

“As I watched the students silently sit at the football field, I was struck by the simplicity of their statement. We don’t have an answer of how to unravel the school safety conversations. What I do know is that the answer will be found through dialogue. The first step of successful dialogue is to listen and understand the myriad of perspectives on a complex issue.”

Organizers of the national walkout say they support an assault-weapons ban and expansion of background checks for all gun sales. They express opposition to nationalizing concealed carry laws and are against efforts to arm teachers.

“Legislators work for us,” said one student on national cable news covering the student gathering at the U.S. Capitol this morning. “We have a right to feel safe in our schools. If they can’t get it done, if our parents can’t get it done, then we’re the future voters who are going to demand change. We want an end to gun violence.”

Blackburn ended his written message to school staff with a question and an answer. “How does one best listen? Watch our kids – it starts with silence.”