The very tumultuous two weeks of U.S.-Iranian relations that ended 2019 and started 2020 has thankfully come to an end. Over the past ten days or so we have had Iranian backed militia attacks on U.S. forces in Iraq leading to several fatalities including a U.S. contractor. This was followed by a U.S. retaliatory counterstrike on the Iranian-backed militia determined to be responsible. Iranian backed militia then attacked the U.S. Embassy in Iraq in response to the U.S. counterstrike. The U.S. then responded by targeting Quds Force commander Qasem Soleimani. Finally, Iran countered with a ballistic missile strike on U.S. bases in Iraq.

As the first full week of 2020 comes to a close we should all take a deep breath, think a bit about what has occurred, what may come next, and be very thankful that things are not escalating for the moment. For a detailed treatment of what such an escalation would look like, please see my August 2018 article for The Modern War Institute at the U.S. Military Academy. 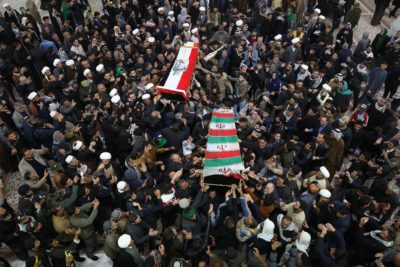 All of these statements are in opposition to the official explanation that the U.S. provided under our treaty obligations to the United Nations, that this was an act of self defense under Article 51 of the U.N. Charter. Right now the official position of the U.S. government as to why it undertook the targeted killing of Major General Soleimani is all over the place, regardless of whether it was a strategically acceptable decision, or whether one agrees with it. And this strategic miscommunication leads to strategic confusion.

The U.S. is not operating alone in the Iraq and Syria, or in our other active theater of operations in Afghanistan. In Iraq and Syria, we have assembled a large coalition of allies and partners and our operations in Afghanistan are now mostly a NATO training mission. Our actions, no matter whether strategically acceptable or not, have potential repercussions for our allies and partners. Being unable to formulate and articulate a reasonable, acceptable, and accurate justification for our strike against Soleimani makes it much harder for our allies and partners to support us, because they cannot be sure why we took the actions we did.

It also makes it that much harder for Iran, and Iran’s allies and partners, to conduct their own strategic calculus as to how to respond in both the short and long term to our actions. Neither of these situations are acceptable, but they are the reality we are facing because of the strategic confusion that U.S. strategic miscommunication has created.

The strategic confusion in which we now find ourselves, created by the unwillingness or inability of the current administration to get its story straight regarding the Soleimani strike, is also overshadowing the potential follow on effects of the strike. Iran’s counterstrikes on U.S. bases at al Asad and Erbil are not the only response that Iran will take. They were merely what was necessary so that Iran’s leadership could regain face, both within the region and at home.

Iran’s real strength is leveraging all elements of national power (diplomatic, information, military, economic, financial, intelligence, and legal (DIME-FIL) in asymmetric and irregular ways in service of the unconventional warfare strategy that Iran has been pursuing within the Middle East and throughout the world for decades. It was this strategy that Major General Soleimani  helped to create, oversaw, and directed through local proxies and other Iranian assets that provided both greater and lesser amounts of deniability for Iran’s actions.

While Soleimani is now gone, his long serving deputy has now succeeded him in commanding the Quds Force. The unconventional warfare strategy is still in place. But Iran’s response to the U.S.’ targeted killing of Soleimani is not over. The overt initial response (clearly attributable to Iran) is complete, but Soleimani’s shadow war goes on. U.S. strategic miscommunication, and the strategic confusion created by it, will only make it harder to combat the unconventional responses that Iran will undertake on their own timetable. The U.S.’ inability to articulate reasonable, acceptable, and accurate justification for our strike against Soleimani will make it harder for the U.S. to effectively contest this shadow war.

Editor’s Note: During the process of completing this week’s column, the explanation for the “imminent threat” posed by Soleimani that constituted the reason the President ordered his killing, changed more than six times.