Thinking Security: The Information Did Not Meet Our Expectations, So We Made It Up… 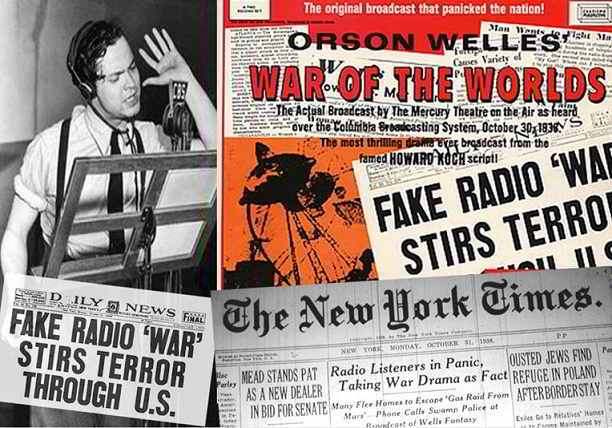 …..ANNOUNCER TWO: Ladies and gentlemen, here is the latest bulletin from the Intercontinental Radio News. Toronto, Canada: Professor Morse of McGill University reports observing a total of three explosions on the planet Mars, between the hours of 7:45 P. M. and 9:20 P. M., Eastern Standard Time. This confirms earlier reports received from American observatories. Now, nearer home, comes a special announcement from Trenton, New Jersey. It is reported that at 8:50 P. M. a huge, flaming object, believed to be a meteorite, fell on a farm in the neighborhood of Grover’s Mill, New Jersey, twenty-two miles from Trenton. The flash in the sky was visible within a radius of several hundred miles and the noise of the impact was heard as far north as Elizabeth. We have dispatched a special mobile unit to the scene, and will have our commentator, Carl Phillips, give you a word description as soon as he can reach there from Princeton……

And so began the War of the Worlds. Or, rather, a mass panic across the U.S. caused because people tuned their radios in late and missed the quickly covered disclaimer that the Columbia Broadcasting System, its affiliated stations, and the Mercury Theater on the Air, led by Orson Welles, was doing a special edition radio play of H. G. Wells’ War of the Worlds’ for the audience on Halloween 1938. This now iconic piece of Americana came to mind today because of an interesting article published in The New York Times Magazine.

The New York Times Magazine has just published a confessional article by a former videographer and video editor for Alex Jones’ InfoWars. The tag line for the article, which I’ve repurposed for the title of this week’s column, is: “The information did not meet our expectations, so we made it up…”. More specifically, the author after recounting how they were sent to report on the Muslim-American community in upstate New York known as Islamberg, which Jones believed housed a clandestine terrorist training camp, recounts:

“The information did not meet our expectations, so we made it up, preying on the vulnerable and feeding the prejudices and fears of Jones’s audience. We ignored certain facts, fabricated others and took situations out of context to fit our narrative, posting headlines like: Drone Investigates Islamic Training Center; Shariah Law Zones Confirmed in America; Infowars Reporters Stalked by Terrorism Task Force; Report: Obama’s Terror Cells in the U.S.; The Rumors Are True: Shariah Law Is Here!”

As the author goes on to recount, none of this was true.

In fact I can tell you that the allegation first gained momentum as the result of an anti-Muslim investigative foundation founded by dark money, with ties to an extreme religious right group in Israel. Its board is made up of some of the most notorious Islamophobes, conspiracists, and one member who has been credibly accused of involvement in ideologically indoctrinating the militia who carried out the Sabra and Shatila massacre of Palestinian refugees in Lebanon. And the reason I can tell you this, is that this agitprop somehow made its way into a security briefing for one of the general officers I once served as cultural advisor (senior civilian advisor), which led me to having to debunk this nuttiness in real time before it could make everyone dumber.

While the person giving the briefing claimed he got the information from a federal security briefing, given that the FBI had already debunked this conspiracy theory several times, I found it then, and still find it hard to believe now. What I didn’t know then, because I don’t listen to him or watch him, but know now, is that shortly before the briefing, Alex Jones featured this stupidity on his program. My guess is that this is where the person giving the briefing really got the information.

The first thing I did after this information was presented was interject as forcefully and politely as possible and indicate that Islamberg was in close proximity to Hancock, NY, which has a sizable ultra-orthodox Jewish community. Therefore, if there was an extremist Muslim training camp there, we’d certainly have heard of concerns from this local Jewish community. This, fortunately, elicited chuckles, including from the commanding general, which derailed this misinformation. After the meeting, at the request of the deputy chief of staff, I provided everything I could to further debunk this misinformation, and he pushed it up the chain of command. Problem solved. For that commander, command group, and staff.

But that doesn’t alleviate or eliminate the larger problem, which is that people actually get their news from Jones and believe it is factually accurate and true. And that misinformation, which is pushed out by Jones to line his pockets and fleece his listeners, can now make it into security briefings for senior leaders!

Jones isn’t really engaged in journalism. He’s not actually broadcasting to inform anyone. He’s in the entertainment business. What he’s trying to do is entertain his audience of listeners and viewers by presenting content that results in an emotional response. All too often, that content is intended to elicit fear and anger. Jones, and others like him, make their money scaring and angering their audience. And they do this by tearing down both legitimate sources of news and factual information, a well as the actual news and factual information itself.

Part of the reason America and Americans are so at risk for information warfare is that we are all too willing to misinform ourselves. It is very easy for hostile foreign actors to make it impossible for Americans to determine what is true, so that anything and everything seems possible, because we all too often do it to ourselves.

One of the results of the mass panic caused by Columbia’s broadcasting Welles’ radio play of Wells’ War of the Worlds’ is that it is never broadcast now without a disclaimer being repeated at regular intervals just in case someone has tuned in late and doesn’t have any historical memory of what happened that Halloween in 1938. When I was an undergraduate in Atlanta one of the local rock stations would broadcast the radio play every Halloween. It has stayed with me because of the disclaimer being regularly repeated every half hour that it was, indeed, a play and not breaking news.

Unfortunately there is really no way to require Alex Jones’ InfoWars and others like him to regularly include a disclaimer that they are broadcasting entertainment, not news. And they have no legal requirement to actually be factually accurate. As a result it is up to all of us to ‘think security’ when determining sources of news information, as well as the information itself.

Cover image: It has been 81 years since the Orson Wells’ radio broadcast of “War of the Worlds” terrified people across Europe and the U.S. when they mistook the fictional radio show broadcast in Oct. 1938 as the real thing — an invasion from Mars.