As COVID-19 Variants Rise Again and Summer Gatherings Loom – What is going On with Vaccines for Kiddos?

Parents of young children are not just impatient, they are getting worried. For the third day in a row, new cases of COVID-19 BA.2 variant in the U.S. have topped 100,000. Immunologists say that we are likely facing surge of yet another variant come fall. So where are the vaccines for the little ones?

That is the million-dollar question, as 18 months after the vaccines for adults, there is still no vaccine for those from infant through age five years old. 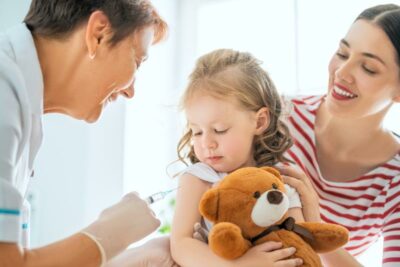 Little girl gets her flu vaccine. Photo courtesy of Unsplash.

For months, parents of young children under the age of five have been promised that vaccines for the little ones are coming.  They are frustrated, and confused and, they say — this feels upside down; normally it is the littlest among us who are the ones being scheduled for shots– and there are a raft of childhood vaccines.

Around 70 percent of Americans have been told they no longer need to wear face masks. But little ones are still going to preschool in facemasks. As summer arrives and family trips and family vacations are being scheduled — as gatherings now include not just those who are vaccinated, but those who thumb their noses at science and remain unprotected. Once again, the parents of the littlest ones may have to skip the gathering to keep the littlest of us safe.

“We feel trapped — like we’ve been forgotten,” said one mother with three children under the age of four. “What do we do? And the solution is not ‘don’t worry they won’t get it.’ How would you feel if it were your kids?”

The communications from the Food and Drug Administration (FDA) has been confusing at best; full of shifting timelines, delays, and misinformation. The news is up, down, and sideways. There are parents obsessively tracking every press release, investor report, and social media announcement for information.  According to social media posts, some, with children aged five have lied that their children are already six to get their children vaccinated. 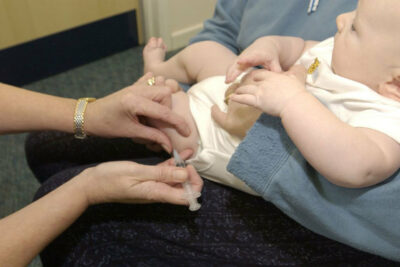 “I just feel like we are being left on Pandemic Island,” said Jen Wendeln, the mother to a 3-year-old boy in Cincinnati, told ProPublica this week. “They’ve sent rescue boats several times and then told us: ‘Never mind, none for your children. Don’t worry, we’ll come back, just keep waiting.’”

The holdup is not just frustrating, as the nation passed the 1,000,000 mark of those who have died, it is terrifying to these parents who have been told over and over, that vaccines for little ones are coming “soon”.

In September 2021, these parents were told that two-shot data for two- to four-year-olds would be available “before the end of the year,” by Pfizer’s CEO Albert Bourla. He said that submission to the FDA would come soon after. That data got set aside as Pfizer added a third shot for adults.

So the little ones were put at the end of the line — again.

Then parents were told by Dr. Anthony Fauci that authorization could happen sometime in February 2022, because the FDA had a Feb. 15 meeting with outside experts to review Pfizer’s data, to see if they couldn’t authorize a child-size two-dose vaccine while still gathering data on the third. Then that meeting got postponed by the FDA — again saying they were waiting for better data.

It should be pointed out that this keeps happening; first there was the delta variant, then omicron and children began to fill pediatric hospital wards.  Parents’ frustration grew. ProPublica documented the concern:

“I put my kids in car seats. I laid them on their back when they were babies so they wouldn’t suffocate,” said Dr. Amy Cho, an emergency room physician in Minnetonka, Minnesota. Knowing that vaccines are preventing deaths in kids over five, it pains her that one isn’t available yet for her three-year-old. “I couldn’t live with myself knowing I didn’t do everything I could to prevent that outcome,” she said.

These parents remain not just in waiting, but in very narrow worlds, seeing only a few close friends, and limiting their children’s experience of the world. Many have not sent their children to pre-school; with unknown ramifications to their social and emotional development. For them, the world seems upside down; where the littlest, who normally receive attention and protection first — now appear to be last.

It should be pointed out that not all parents of young children are equally concerned. Only one in four children ages five to 11 are fully vaccinated. According to an anonymous FDA official, many parents say they want to wait and see for absolute certainty that the vaccines will work (which may or may not be possible). Another third say they just don’t plan to have their kids get the vaccine.