The preliminary numbers are in, and it looks like our county had a record number of bird species spotted by observer teams on the official Christmas Bird Count. According to ecologist/volunteer naturalist Sally Waterhouse, who reviewed some preliminary totals provided by the volunteer teams, the 2018 count here set a record; both for species counted – 81, as well as for the number of participants, 29.

In case you don’t know, the Christmas Bird Count is a national (and international) birding event every year to give ornithologists and those involved in species preservation efforts a broad volunteer force to help compile some important data on the health of numerous bird species.

Locally, the Greater Arkansas River Nature Association Birding Group, and Colorado Parks and Wildlife partner for the count, under the auspices of the Audubon Society with participation from groups including the Central Colorado Conservancy. 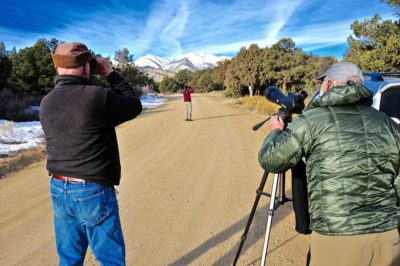 One of the Christmas Bird County crews at work in northern Chaffee County on Dec. 15. From left are Joe Lyford, Lee Coveney and Greg Mihalik.

Each bird count takes place in an established 15-mile wide diameter circle, divided into segments. Locally, organizers divide the county up into zones for the teams to operate in; this provides precise counts and avoid duplication of sighting counts. Participants follow specified routes through their designated circle, counting every bird they see or hear that day, giving an indication of the total number of birds in the circle that day.

Audubon reports the data collected by participants over the past century and more contribute to one of only two large pools of information informing ornithologists and conservation biologists how birds in the Americas are faring over time.

Locally, organizers divide the county up into zones for the teams to operate in; this provides precise counts and avoid duplication of sighting counts.


More experienced birders, who may have broad experience in both sighting and hearing birds, as well as being experts at bird identification may lead teams and perhaps be placed in areas where populations tend to be higher, requiring quicker bird ‘reflexes’

Almost all the teams also enjoy the prospect of being outside no matter what the weather, and the ‘thrill of the hunt.’

Conservancy Executive Director and birding expert Andrew Mackie, who headed up the count effort for years before turning the reins over to Waterhouse, points out that it’s important to record what species are missing from the count as well as what’s found, year-to-year in compiling population data.

The weather for the count can sometimes be chilly and challenging, but dedicated birders turn out because they realize the importance of the information they gather. 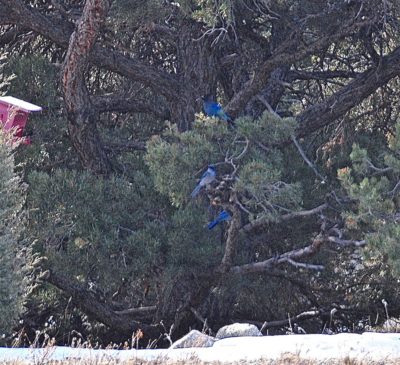 A trio of jays of varied species perch near a bird feeder.

The Christmas Bird Count – the 119th this year, was derived historically from the old English tradition prior to the 20th Century when hunters would take part in what was called a ‘side hunt’ during the holiday season and go failed with guns shooting birds and mammals in what sometimes was an irrational contest to see who could compile the most victims, or ‘takes.’

Fortunately, ornithologist Frank Chapman, concerned over declining bird populations and an early founder of the Audubon Society, proposed that a bird count, rather than hunt be conducted during Christmas 1900.

Fortunately the tradition has flourished, and each November, tens of thousands of bird lovers and birding enthusiasts sign up for the Christmas county that runs from Dec. 14 through January 5, enduring all kinds of wintry weather to assist in the important count. 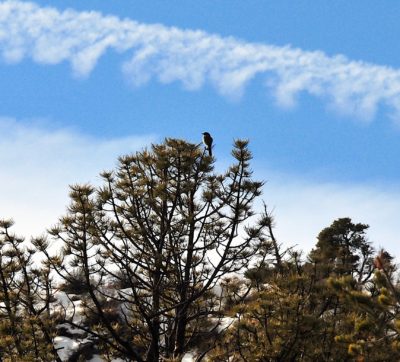 From a distance, a Townsend’s Solitaire sits atop a tree.

Waterhouse said there were a couple of new species seen locally this year: the Horned Lark and Lincoln’s Sparrow were new to the list, and there were rare sightings of the Harris’ Sparrow, Rusty Blackbird and Yellow-rumped Warbler. He said the milder weather leading up to the count could have played a factor in those sightings.

Notable absences this year, Waterhouse noted, were some accipiters, including no sightings of Cooper’s Hawks or Sharp-Shinned Hawks, often spotted around bird feeders, looking for other birds as prey. Waterhouse says they are here, but were probably just missed in the count.

Audubon points out the Christmas Bird Count relies 100 percent on donations to provide support to compilers and volunteers on count day, to manage the historic database, and to fund the technology to make historic data available to researchers. Donations can be made at audubon.action.org.