President Joe Biden signed the marriage equality bill into law at 4:20 p.m. Tuesday afternoon on the lawn of the White House, saying the reason for the bill is simple: “It’s who do you love?”

The final version of the bill that now protects gay and interracial marriage passed both houses of the United States Congress. In his remarks before signing the bill, Biden gave credit to several Republicans for their support of the bipartisan bill, including Senator Susan Collins of Maine and the bill’s main supporter Democrat Tammy Baldwin of Wisconsin.

An overwhelming majority of House lawmakers supported the bill, including 39 Republicans, which voted 258-169 to pass a version of it for the second time.

“Standing behind me are dozens of plaintiffs who fought for marriage equality through the years,” began Biden. “We’re here to celebrate their courage that has led to progress.” 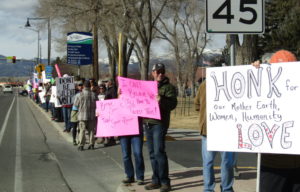 Attendees of the Women’s March in Salida voiced opinions about a variety of rights and issues from women’s rights, to voting rights, ecology and gay rights.

Public opinion regarding marriage equality has shifted significantly through the decades, from near overwhelming disapproval fifty years ago, to today, when Gallup reports that 70 percent of Americans support marriage equality.

“In Colorado, we value and respect freedom. The bottom line is that people want the government out of their bedrooms. The focus of leaders should be on protecting and expanding the freedoms of Americans and helping save them money,” said Colorado Governor Jared Polis. “Our country and state have seen how fragile our freedoms can be when under attack by out-of-touch groups or individuals so we welcome this federal action and thank the members of Congress, many of which I served with, for their bold, pro-freedom actions.”

This moment has been more than 50 years in the making. In 1967 the U.S. Supreme Court began to break down the barriers — first in the decision known as Loving v. Virginia striking down the laws against interracial marriage, and then deciding that marriage among same-sex couples was protected under the right to privacy.

But last summer, when the U.S. Supreme Court rescinded the laws protecting women’s reproductive freedom, Judge Clarance Thomas struck terror in the hearts of many when he inferred that the court needed to revisit its decision related to same-sex marriage and birth control.

That reference to the removal of more rights that had been assumed to be protected, spurred the United States Congress to act this fall. It advanced different versions of a bill in both the U.S. House and the U.S. Senate that protects same-sex and inter-racial marriage. The final version of the equality act was passed late last week. The new bill will also require states to recognize same-sex marriages even if a Supreme Court precedent establishing this right is overturned.

As many politicians and pundits have noted: this is a historic moment for the country.