While the agenda for the Dec. 20 Salida City Council meeting was lengthy, the ordinances under consideration only received a single public comment. All the ordinances and resolutions passed on unanimous votes, with council member Jane Templeton on vacation and absent from the roll call. 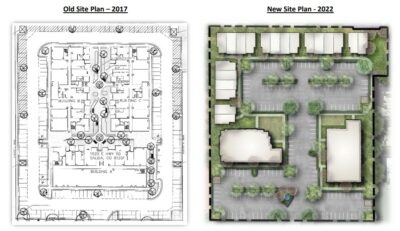 None of the more than 20 conditions and additional recommendations clarified by Development Director Bill Almquist (and confirmed in Planning Commission hearings) triggered any pushback from staff or elected officials.

Council member Mike Pollack expressed his support for the project, seconded by member Justin Critelli. Member Alisa Pappenfort also stated she was pleased about more trees being planned and that groundbreaking is scheduled for first quarter of 2023.

The applicant’s representative, Bernard Weber spoke briefly, clarifying an intent to provide greenery along the parcel’s southern edge (facing U.S. 50) to soften the site mass while still showcasing the commercial portions of the project.

Mayor Dan Shore added his appreciation for “all the hard work that staff and the applicant have put in.” He further noted that “there are no height issues and that the modified plan represents a 25 percent reduction in density.” Council member Critelli made further reference to planned development projects in the council member reports that concluded the meeting (see below).

During the final reading and public hearing, Craig McMillan of 602 Park Avenue spoke. He said he was unsure as to who his council representative was and said he was “shocked that no one was here” to speak to the STR taxes. He wanted to ask questions but Mayor Shore said this was not the venue for that and offered to speak with him after the meeting.  McMillan then said that a current guest wanted to add a day to his stay and the guest claimed that the new fees were already being imposed by McMillan’s management company (though they do not become effective until January 1).

Pappenfort said she hoped to rewrite the language of the ordinance and also gradually impose the new taxes. Her motion to amend failed  (3-2) and then on a roll call vote, the motion as originally written, passed (including Pappenfort’s vote). Mayor Shore noted that as a statutory city, “our hands are tied”, suggesting that citizens could consider supporting a Home Rule Charter to fine-tune ordinances like this and improve their equity.

With amended actual revenues exceeding budget projections in an amount more than adequate to cover it, a $339,000 addition was made to both revenue and expense in the 2022 budget. The amendment was triggered by higher-than-expected costs on the 2022 Sewer Reconstruction Project as well as new consultant expenses for the proposed Poncha Trunk Line project. 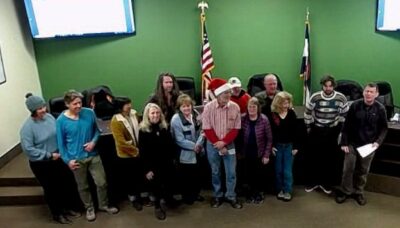 A highlight of the evening was the formal conveyance of the Salida Community Center to its current operators Salida Citizens, Inc. After signing the property over as a result of the Nov. 8 election, Community Center staff, board and volunteers gathered for a group photo.

A shout-out was also given to the Community Center board and especially to Director Elaine Allemang for her years of service there.

City Administrator Drew Nelson stated that the proposed lease had been reviewed with the City Attorney, reflecting an unplanned opportunity for the City to secure public parking for calendar year 2023.

However, he noted that the UPRR lot is much larger and that it also contains unusable land near the riverbank. This, in his opinion, brought the cost per square foot down to a reasonable level, especially given rising land rates.

Aside from a round of year-end holiday wishes from council members to the staff, one council member report tied directly to the Salida Crossings ordinance approved earlier.  Justin Critelli sought to caution citizens from petitioning every new project and overdrawing general conclusions from the recent failed ballot issue regarding the Salida Bottling Company project.

He said “Only four years ago we approved a project that was well taller and had way more density…When it comes to council and our moving forward entertaining future planned developments, I will continue to bring  in the differences from the bottling plant to the ones we are discussing.” For example, “Do they have rentals, is there more green space, was there a parking lot there before?

Reached for confirmation of understanding that each project is different and needs to be evaluated on its own merits, Critelli said that ” there was not some sort of hidden message from the voters that spoke out against density, height or the planned development process as a whole”.

“The election just proves that people didn’t want one planned development in particular and anything more than that is …just conjecture,” he added.