Brad Moore, Director of Operations for the Sopris Theatre Company at Colorado Mountain College, describes “The Thanksgiving Play” by Larissa FastHorse as “pointedly and deliberately funny.”

The satiric comedy, directed by Moore, opens Nov. 12 at the New Space Theatre on the Spring Valley campus of CMC. 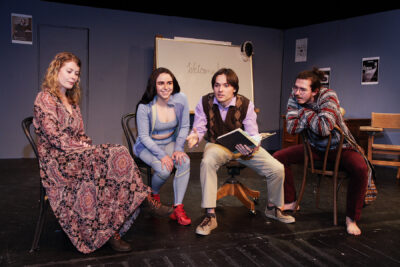 The plot focuses on a group of teachers attempting to mount a culturally sensitive, devised theater piece to teach elementary school students about the first Thanksgiving and Native American Heritage Month. The educators mean well, but the results of their efforts are both hilarious and appalling. As they flounder to tell history the “right way,” it becomes apparent that human culture­ – past and present – is rooted in dubious motives and deep inequalities.

“The Thanksgiving Play” was first produced by Playwrights Horizons and was selected for the 2017 Kilroys List of 32 plays by woman, trans and non-binary authors of color. The Kilroys website describes their membership as “authors, directors and producers in Los Angeles and New York City who are done talking about gender parity and are taking action.”

Moore said that parity is one reason he selected the piece for this year’s season. “We want to do more shows written by women and that highlight diverse cultures,” he said.

Colorado Mountain College student and staff member, Courtney Lindgren, plays drama teacher Logan, who has secured a grant for her boyfriend to help devise and perform in a play designed to honor Native American Heritage Month while teaching the story of the first Thanksgiving.

“As Logan, this is my prove-myself moment,” said Lindgren.

Joshua Adamson, a CMC theatre program graduate, portrays Logan’s boyfriend Jaxton. A yoga enthusiast and actor, Jaxton’s only credential is performing in a play about composting at a local farmer’s market.

“This is a dream come true for him,” said Elmore.

Using money from the grant she secured, Logan hires a professional actor from Los Angeles to play the leading Native American role in her production. Unfortunately, the ethnically ambiguous Alicia, portrayed by Sophia Kai Higbie, has no connection to the culture she has been hired to represent.

The more the team tries to rectify the error, the more problems they create. Aided and abetted by a trio of teaching artists with questionable ideas about how to reach young kids, Logan and her crew can’t help but set the stage for disaster.

Jessica Bowler, who plays one of the teaching artists, is currently studying early childhood education at CMC. “I’m learning what not to do in this play,” she joked.

The ensemble is rounded out by veteran to the CMC stage Michael Banks and CMC theatre student Wyatt Tulk, while Sterling Brintnall, also a theatre student at the college, is stage manager.

Operating under strict COVID-19 guidelines, the actors and crew have worn masks for rehearsal.

“We’ll do whatever we have to do to get to do live theater,” said Tulk.

In keeping with the health and safety recommendations of the college, the actors (unmasked for performance) will maintain a distance of twelve feet from audience members. All attendees will be required to wear masks for the 90-minute show, and there will be no intermission and no concessions.